Porsche’s annual Night of Champions event is a treasure trove of news for the forthcoming season, and with tonight’s announcements, driver lineups for the German marque’s IMSA and FIA WEC campaigns were revealed.

In the WeatherTech SportsCar Championship, the return of overall Le Mans winners Earl Bamber and Nick Tandy should help the Porsche GT Team in its pursuit of its second GT Le Mans Drivers’ and Manufacturers title.

Patrick Pilet, who took the 2015 Drivers’ championship, will have Tandy as his full-time teammate in the No. 911 Porsche 911 RSR with Frederic Makowiecki joining in for the four North American Endurance Cup events. The sister No. 912 entry will pair Laurens Vanthoor and Bamber, and add Gimmi Bruni for the NAEC.

Porsche will also make a four-car assault on Le Mans by relying on its IMSA team to field Pilet, Tandy and Bamber in the No. 93, and Timo Bernhard, Romain Dumas and Sven Muller in the No. 94 as a complement to the two WEC 911 RSRs.

In the WEC, the No. 91 car will be helmed by Bruni, Makowiecki and Richard Lietz when its ‘super season’ launches in May. The No. 92 911 RSR will carry Kevin Estre, Michael Christensen and Vanthoor (Belgium). 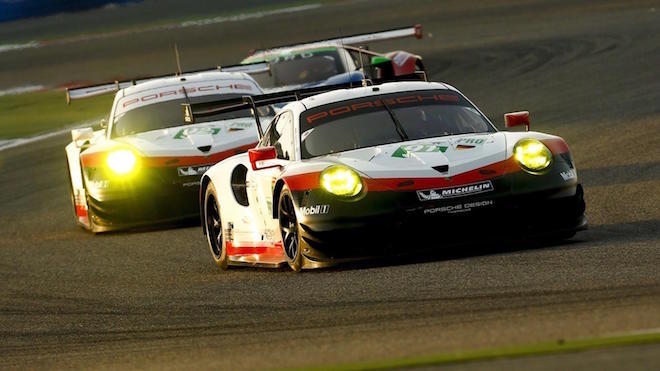 Works drivers Dirk Werner, Dumas and Makowiecki will contest all rounds of the Intercontinental GT Challenge in addition to Porsche’s support of at least one local team in their 911 GT3R pro-class campaign. The trio will also contest the Blancpain GT Series Endurance Cup in a 911 GT3R fielded by Manthey-Racing.