Tom Chilton and Esteban Guerrieri shared the wins but it was Thed Björk who came out on top of a tense title showdown in Qatar as the provisional FIA World Touring Car champion for 2017*.

In his second full WTCC campaign with the factory Polestar Cyan Racing team, Björk started the final weekend of the season 6.5 points in front of Norbert Michelisz. But a brake issue in qualifying left his Honda-driving rival out of contention as Björk drove without fault to touring car racing’s biggest prize on the back of standout wins at Monza and the Nürburgring Nordschleife earlier in the year. Fifth in the Opening Race, the Swede was heading for a podium in the Main Race before handing the place back to team-mate Nicky Catsburg following an earlier gesture by the Dutchman.

And during a night of Swedish celebration, Volvo Polestar won the FIA World Touring Car Championship for Manufacturers with Catsburg and Yvan Muller – on his return to the WTCC – helping to ensure it beat Honda by 28.5 points. Néstor Girolami also performed strongly for the team in 2017, winning from pole in China.

Elsewhere, Tom Chilton beat fellow Briton Rob Huff and his Sébastien Loeb Racing team-mate Mehdi Bennani to the WTCC Trophy for independent racers, winning the Opening Race to boot ahead of Bennani and Kevin Gleason, with the American claiming his first WTCC top-three.

Esteban Guerrieri marked an impressive debut WTCC bid with the Main Race victory for Honda and was joined on the podium by Tiago Monteiro, the former world championship leader he replaced after the Portuguese was injured in a testing crash in September. Huff and Catsburg completed the podium amid emotional scenes.

In the Main Race, former ETCC champion Richard made up for his hesitant start in the first counter, passing Muller with an audacious move to finish sixth on only his fourth WTCC start. Filippi and Michigami rounded out the points scorers, with Coronel just missing out in P11. Bennani retired with damage following first-corner contact with Muller.

RACE WINNER QUOTES
Tom Chilton (Opening Race winner, WTCC Trophy champion): “It’s a dream come true if I’m completely honest. It’s nice to have a fight with great drivers and all the drivers on this grid are the best in the world and it’s a pleasure to drive on track with them. I don’t think people realise how enjoyable it is and how much you are learning from these guys. Last year I finished second and I was a bit gutted but now I’ve got the trophy. It was a proper fight with Mehdi, it was a fight for the title and it wasn’t handed to me on a plate. Respect to Mehdi because he’s been a fierce competitor all year, just like Rob Huff. It wasn’t easy at all and I’m just really, really happy. The second half of the year for me was a lot better than the first half and it really came right for me.”

Esteban Guerrieri (Main Race winner): “Luck sometimes doesn’t play in your favour and that was the case for Norbi and I’m gutted with this situation. It was difficult to help him in the championship in the end so in the Main Race we just decided to go for the win. My car really improved for the Main Race, having nobody in front of me helped, but my car was mega, the best car I ever drove and it’s big thanks to the Honda team. I am really thankful for this year and everybody who created this opportunity for me. It was really like a rollercoaster year for me, it was incredible. In March I didn’t even know I would be at the first race but I managed to get some wins and the Honda thing happened, unfortunately because of Tiago’s accident. Here’s here and I really wanted to share the moment with him because he’s had some tough times.”

Thed Björk (FIA World Touring Car champion): “It’s incredible now I’ve calmed down a bit but it was completely crazy at the finish with so many feelings. I felt really good driving here. It obviously made it easier with the problems Honda had with Norbert but I feel like I’ve been putting the championship together all year. For me I felt like I won it in Macau because it was my first time there and these guys had been there and I was just trying to keep the lead because Norbert was really fast there. But it just feels good now. It’s fantastic to be a part of the group. We fight so hard like all race teams do to win championships and races. If you set a goal and achieve it, it’s unbelievable. But I have to send my thoughts to Tiago because he had to leave the championship because of an accident. Big respect to Tiago and I am missing him a lot and I send all my best to him. I hope he can come back and take another championship because he deserves it.” 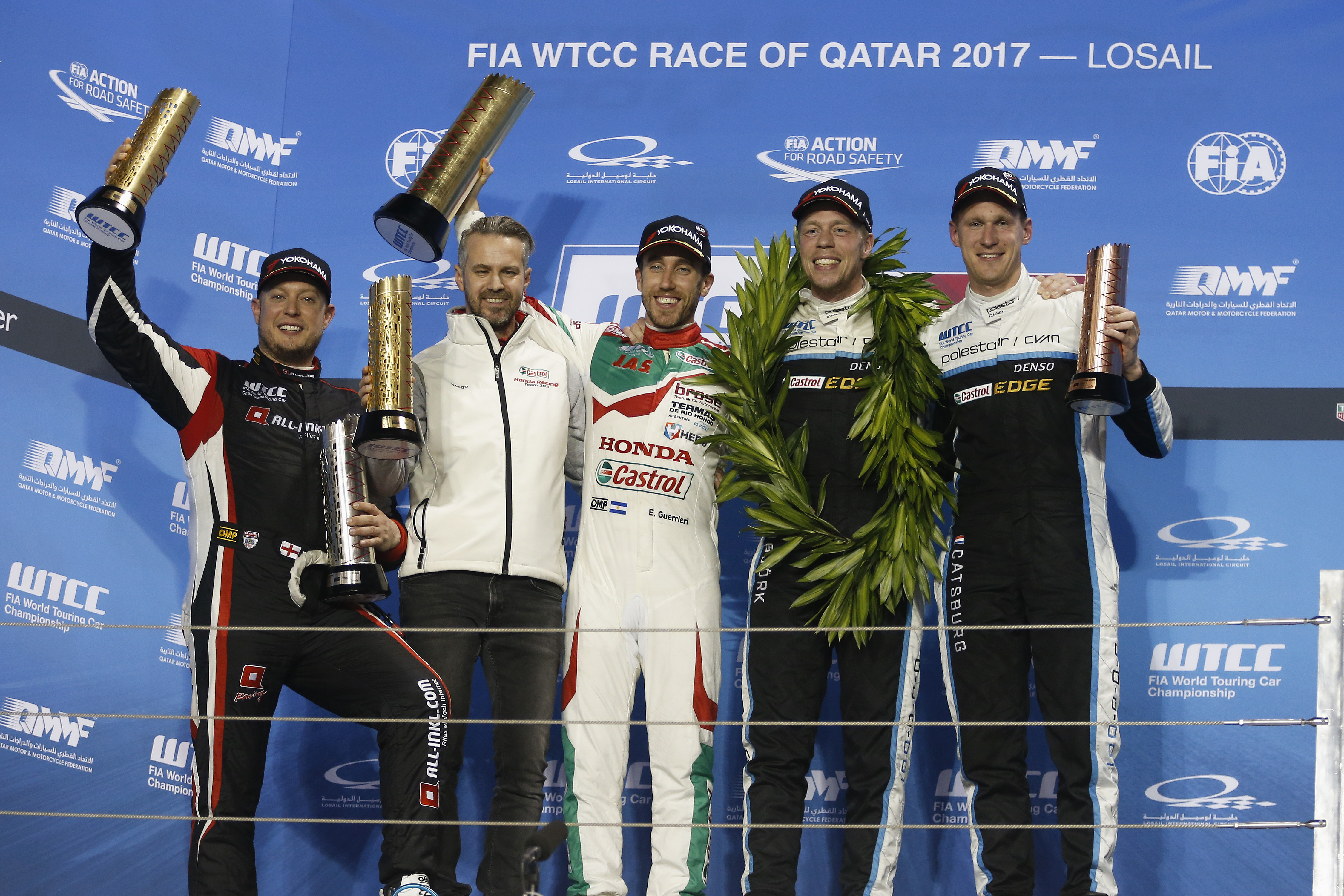