If I had to guess, I’ve watched the 1986 Charlotte IMSA GTP race at least 20 times. The sight of the world’s most diverse and cutting-edge prototypes, deep in NASCAR country, navigating Charlotte’s awkward layout still holds its fascination for me. And in another nod to the different times when GTP thrived, the early domination by Klaus Ludwig in his four-cylinder turbo Ford Probe was thrilling to behold.

No Balance of Performance. No cries of unfair advantages. And no surprise when GTP engines, wound beyond their limits, exploded in spectacular fashion.

Ludwig buried his foot in the throttle and crushed the Porsche 962s, Buicks, Corvettes, Jaguars, and all manner of prototypes…while asking those four little cylinders to stay below their melting point. Surviving a three-hour race like the 500km Charlotte Grand Prix was anything but a guarantee, and if you’re a fan of drama, mystery waited around each corner for the leader and those in pursuit of the rapid German. Although Ludwig was the early star of the event, he wasn’t necessarily the one spraying champagne at the end… 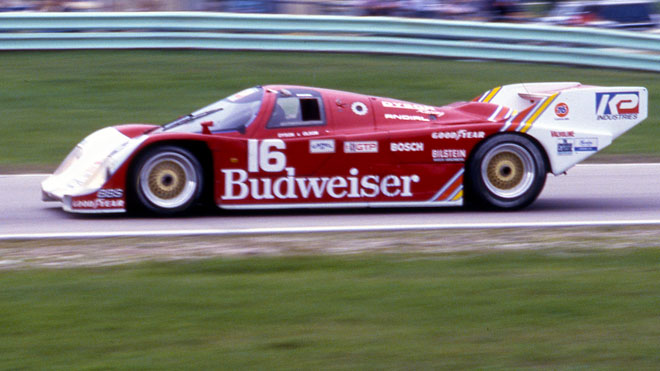 The event made use of the North Carolinian track’s sweeping oval and rudimentary road course which, despite its shortcomings, also made for great television. Check out the grandstands, as well. Fans flocked to see these caged animals unleashed in an unnatural environment.

And on the very real grounds of safety, a chicane comprised of tire bales was installed halfway down the back straight, and while it certainly looks strange, slowing GTP cars that weighed half of the average stock car and made power in the 900-1000hp range was a necessity.

With the recent repaving and modernization of Charlotte’s infield road course in mind, NASCAR fans will get a look at its original state, free of safety measures and other conveniences we’ve come to expect today.

Spend some time with Ken Squier, Bill Adam, and Dave Despain – checking in from the old TNN broadcast hut – and turn up the volume for the wicked-fast meeting between IMSA GTP cars and Charlotte Motor Speedway on May 18, 1986.