He took a drive-through penalty for failing to make the car change within his pit box, but Briton Sam Bird still managed to show the field a clean pair of heels to win the first ePrix of Season 4 in the FIA Formula E Championship in Hong Kong. The DS Virgin Racing driver finished over 11 seconds ahead of a tight battle for the podium between Jean-Eric Vergne, who ended up in second place ahead of a somewhat disgruntled Nick Heidfeld in third place. Heidfeld felt that Vergne was a touch too aggressive in defending his second place over the last few laps.

The problem for Bird occurred in a visibly dusty pit lane when he attempted to turn into his box – the car understeered, scattering the crew in the adjacent box. Having overshot, he leapt from his car while it was still in the pit lane before strapping into the second car, which infringes the rule dictating that the car swap must take place entirely within the pit box.

“That was a crazy race,” said Bird. “I’m still having a hard time processing it, to be honest. I thought the drivethrough was a bit harsh as the pit lane was very dirty. When I emerged from the drive-through, I was sure I would be in sixth or seventh. They told me over the radio I was in first, and I really couldn’t believe it.” 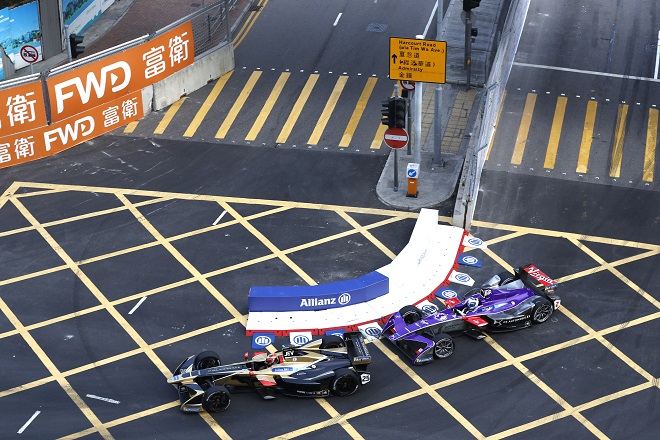 Just before the car swap, Bird masterfully overtook Vergne (leading, above) on lap 20 with a pass at Turn 6. The two pitted for their car swap within a couple of laps of one another. Despite his trouble, Bird managed to retain the lead, and more remarkably, kept it after serving the drivethrough, thanks in part to the short pit lane in Hong Kong.

An incident in Turn 3 on the first lap that saw Andre Lotterer caught on the outside of the tightly bunched field forced him to nose into the wall. That resulted in the following cars ending up stuck behind him. With the track blocked, the race was redflagged, only to be restarted behind the pace car after a more than 30minute delay.

Once resumed, there was action aplenty up and down the field. Defending champion Lucas DiGrassi suffered a damaged right rear from contact on the opening lap, forcing him to pit for car swap earlier than he would have wished and thus dropping him out of contention. Equally last year’s runnerup, Sebastian Buemi, suffered his share of troubles, including coming to a full stop on track due to a batter management system failure in the waning laps of the race.

While Bird stretched his lead, Vergne and Heidfeld ran practically nosetotail over the final dozen laps. Try as he might, Heidfeld couldn’t manage to get his Mahindra Racing machine around the Techeetah of Vergne ahead of him. Meanwhile Nelson Piquet Jr. – in his debut race for Panasonic Jaguar Racing – made scintillating pass in Turn 6 to earn his fourth place ahead Daniel Abt who completed the top 5 in his Audi Sport Abt Schaeffler machine.