For the first time this season, all 10 teams took to Hong Kong’s city streets for the first non-qualifying practice of the 2017 HKT Hong Kong E-Prix.

Former champion and Renault e.dams driver Sebastien Buemi set a 1m03.310s, catapulting him to the top of the standings, finishing four tenths quicker than the rest of the pack.

Newcomer and Dragon driver Neel Jani had difficulties as he oversteered, glanced the wall and broke his front suspension, sending him back to the pits for maintenance.

Former Formula 1 driver and now Andretti Formula E driver Kamui Kobayashi, having barely had any time to get used to the car, spent much of the session at the bottom of the standings, finishing in with a time of 1m05.820s.

Reigning champion and Audi Sport ABT Schaeffler driver Lucas di Grassi was fourth fastest with a time of 1m03.969s.

With 14 cars all running with less than one second between them, this season of Formula E is looking to be very promising indeed. 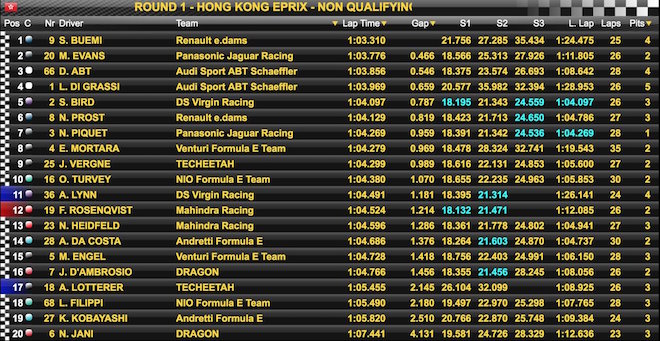