The final round of the 2017 FIA World Rallycross Championship presented by Monster Energy – Gumtree World RX of South Africa – takes place in Cape Town this weekend (10-12 November).  Cape Town RX marks the first time that rallycross has taken place on the continent of Africa and is the only FIA World Championship event to be staged in sub-Saharan Africa.

The World Championship has already been won by Sweden’s Johan Kristoffersson but this weekend will see a fight for the runner-up spot as Petter Solberg [Norway] and Mattias Ekstrom [Sweden] go head-to-head at the Killarney International Raceway.  Only one point separates 2016 World Champion Ekstrom from former champion Solberg going into the final event of the season and with 30 points up for grabs, qualifying will prove pivotal in the battle for second place.

Two South African drivers will compete at their home event. Mark Cronje will drive an Albatec Racing Peugeot 208 WRX and Ashley Haigh-Smith will compete in an Olsbergs MSE Ford Fiesta.

Both drivers will have considerable home support in Cape Town. “I’m sure the event this weekend will be another eye-opener, and I will need to rely heavily on the team with regards to set-up and racing lines,” explained 25-year-old Haigh-Smith whose family farm is just ten minutes from the Killarney track. “It’s going to be a pretty spectacular event. World RX represents a bright new dawn for both the Killarney circuit and motorsport in South Africa in general. It’s a new way forward for the sport in the country, and I think rallycross will massively appeal to the local population. The excitement level is really building, so all I can say to fans is: if you don’t go, you’ll be missing out!”

Other notable names competing in Cape Town include nine-time WRC Champion Sebastien Loeb and America’s Ken Block.  Also joining the permanent teams and drivers will be Sweden’s Oliver Eriksson in a second OMSE Fiesta and Belgium’s Gregoire Demoustier, who will drive a Peugeot 208 WRX for the DA Racing team alongside returning driver Jean-Baptiste Dubourg. Germany’s Rene Muennich has already experienced the Killarney International Raceway as he drove at the event’s launch and will race his Muennich Motorsport Seat Ibiza this weekend.

The Gumtree World RX of South Africa will also mark the final round of the RX2 International Series presented by Cooper Tires. France’s Cyril Raymond wrapped up the title at his home round in Loheac in September, but there are several ongoing battles throughout the 16-car field.  Twenty-two points separate Britain’s Dan Rooke and Belgium’s Guillaume De-Ridder who are second and third in the standings. Moreover, Sweden’s William Nilsson, America’s Tanner Whitten and Sweden’s Simon Olofsson are separated by four points further in the battle for fourth place. Multiple freeriding champion Guerlain Chicherit will race in RX2 as he prepares for competing in World RX full time in 2018.

Des Easom, Executive Manager of Killarney International Raceway commented: “Killarney International Raceway is thrilled to welcome international rallycross and motor racing icons from across the world for this weekend. Crowning the world champion at Killarney is a milestone in our 70th year of racing.  Race fans will marvel at the extraordinary skills of rallycross drivers in cars accelerating faster than Formula One machines on the newly constructed dirt and tar track at Killarney. You will see drivers like Sebastien Loeb, Petter Solberg, Mattias Ekström, Ken Block and current leader Johan Kristoffersson live at Killarney on Saturday and Sunday. We urge race fans to book their tickets at tickpetpros.co.za and not to miss this historic first.”

City of Cape Town’s Alderman (Ald.) J-P (Jean-Pierre) Smith, Mayoral Committee Member for Safety and Social Services added: “Cape Town is adding yet another first to its impressive international events offering:  the first ever World Rallycross event in Africa. Drivers in super-fast cars racing on dirt and tar right in front of spectators against the backdrop of Table Mountain will provide a memorable adrenalin experience for Killarney crowds as well as race fans watching television in 160 countries and more than seven million followers on social media.  The City proudly supports this event in terms our strategy of being the Events Capital of Africa.  The newly constructed track offers a legacy to start a local RX series and the World Championship closer will be coming to Killarney for the next five years.  This is a significant shot in the arm for the local economy and great global marketing for Cape Town, South Africa and Africa.”

Paul Bellamy, World RX Managing Director for IMG, concluded: “It’s a huge honour to bring the only FIA World Championship to sub-Saharan Africa and we’re extremely excited to bring rallycross to a new continent. We felt the country was right for a World Championship – I can’t think of a better place in the world to visit than Cape Town at this time of year. We want the crowd to come down to Killarney and support their home drivers Ashley Haigh-Smith and Mark Cronje and we look forward to showcasing rallycross to a packed audience this weekend.”

1700 End of day one press conference (top three after Q2)

From a Cooper Tires Point of view

Paul Coates, General Manager – Motorsport, Cooper Tire Europe commented: “We have reached the final event of the year, in South Africa, and at 6,000 miles from our manufacturing facility in Melksham, England, the tyres have had a long journey over the last month to reach what is likely to be a spectacular season finale. A new circuit is always a challenge and our tyre engineers will be on hand to monitor the tyre’s performance on this latest track to join the FIA World Rallycross calendar.” 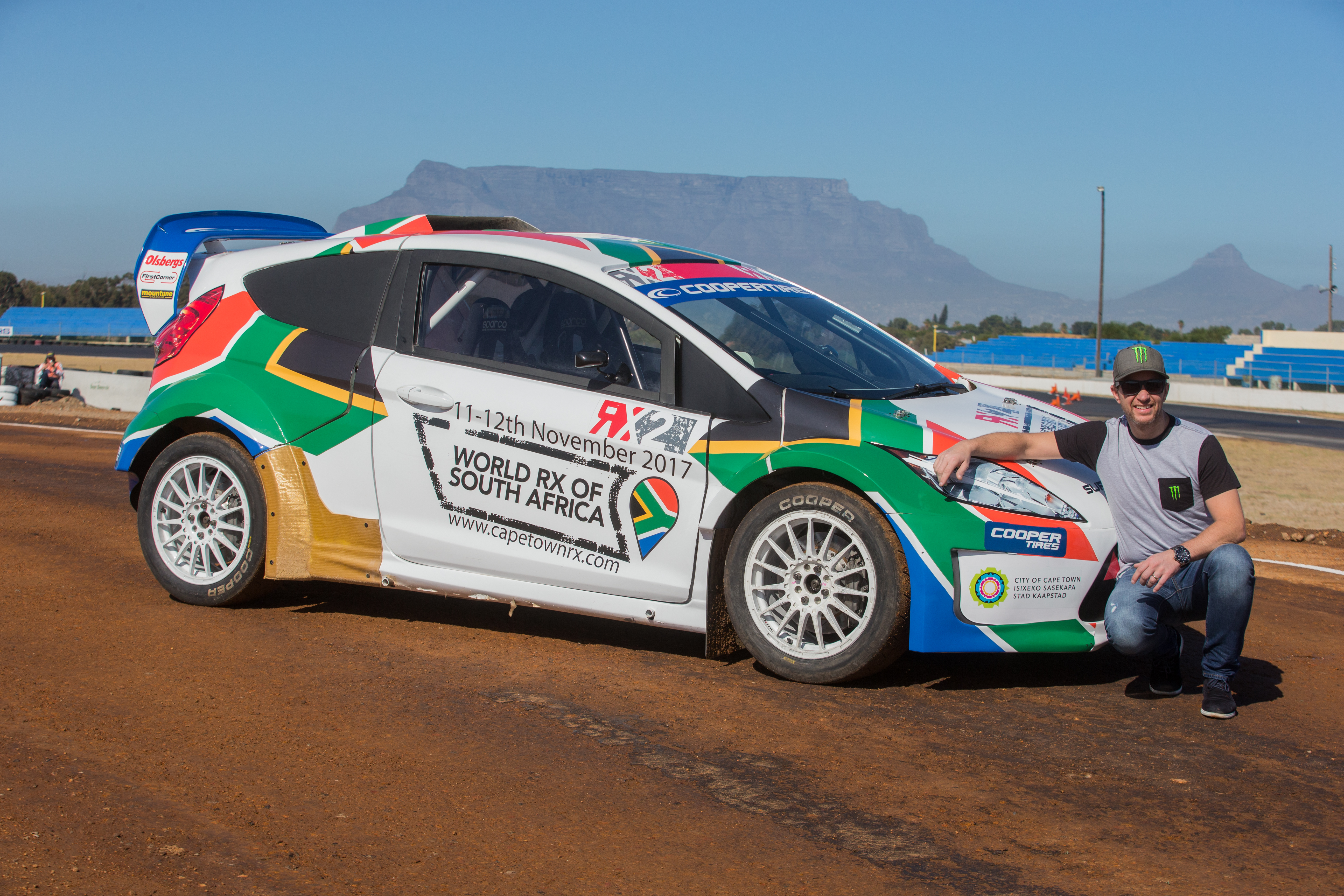