Above: Vintage racer Bill Heifner in his 1993 Camaro.

“I have always seen Sunoco as synonymous with motorsport, dating back to my teenage years when they sponsored the great Indy 500, Trans-Am, and Can-Am cars of Roger Penske,” said Tony Parella, SVRA president and CEO. “To me, having them invest in SVRA in such a significant way further demonstrates how far our branch of the sport has come in just a few years.”

Sunoco Race Fuels is the largest manufacturer of racing gasoline in the world. The company’s heritage includes a long and successful association with Roger Penske’s racing efforts, starting with driver Mark Donohue who won the 1972 Indianapolis 500 in the Sunoco McLaren and took Trans-Am and Can-Am championships during the halcyon days of those series. Today Sunoco Racing Fuels sponsors a wide range of racing series covering virtually every category of race car as well as motorcycles and powerboats. Among the literally dozens of sanctioning bodies sponsored by the company are NASCAR, NHRA, INDYCAR, SCCA and British GT.

“Partnering with the SVRA allows us to reinforce our commitment to bringing Sunoco’s performance fuels to all levels of racing, from grassroots racers to the professionals competing in all premier series,” said Rob Marro, Sunoco vice president and general manager of performance products. “We’ve seen the rapid growth in the important category of vintage and historic racing and are happy to be associated with a leader like the SVRA.”

SVRA’s success in attracting sponsorship investors is a cornerstone to the company’s impressive momentum. Company officials report consistent annual triple-digit growth since 2012. SVRA has rapidly expanded from a regional series largely concentrated in the southeastern United States to one that spans the continent at most of America’s top race courses. This year it increased its schedule to include its first hill climb near the legendary “Tail of the Dragon” roadway in Western North Carolina and most recently announced that they will bring America’s premier vintage racing to Road Atlanta in 2018. 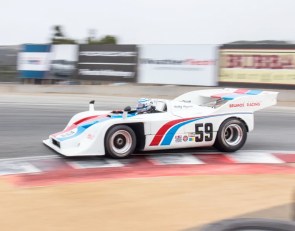