'I'm the hunter, not the hunted' - Bowyer

'I'm the hunter, not the hunted' - Bowyer

Pressure. Pressure is the watchword in the Monster Energy NASCAR Cup Series garage as drivers have just four races remaining to lock up one of this year’s 16 championship spots.

Well, maybe for everyone other than Clint Bowyer.

The Stewart-Haas Racing driver is the first one on the outside looking in. His margin to overcome – if he does not win one of the next four races – is 28 points. But as some of his competitors begin to wonder and worry about his or her position, Bowyer is embracing the fight.

“I’m the hunter, not the hunted,” Bowyer said with a smile. “It’s a lot of fun to go into this weekend knowing that you got to go out there and chase those guys down and hopefully pop off a win here and put it all to bed.”

Bowyer called this time of year fun, and not just because it’s summer.

“It’s just fun. It’s a ton of fun to be able to go to battle each and every week with my teammates at Stewart-Haas Racing knowing you have a chance of winning,” he said. “Knowing you can work alongside such quality people, having a manufacturer behind us as Ford, and the partners we have on these racecars. Everything. Being able to step in that environment and go to battle is so much fun.”

Bowyer’s situation isn’t due to a lack of effort. On the strength of 10 top-10 finishes and an average finish of 12.7, Bowyer is 10th in the championship standings. However, his playoff grid seeding is 17th because the season already has seen 13 different drivers go to Victory Lane. 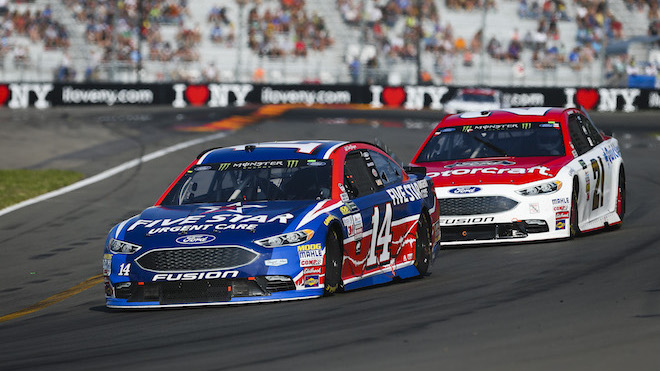 Personally, Bowyer is still looking to snap a winless streak dating back to fall 2012.

“And you focus on the adjustments, the balance of your car so you can go out and qualify well, which enables you to gain those stage points as we go through the race and get a good finish. It’s the task at hand week in and week out that you have to focus on.”

Bowyer has never won at Michigan. In 23 starts his best finish is a fifth-place effort in the August 2013 race in addition to 11 top-10 finishes.

“You can’t worry about those points,” Bowyer continued. “You have to go out and accumulate and do your job week in and week out and if you do that, I feel like the way we’ve been running, we can honestly get in [to the playoffs] two different ways.