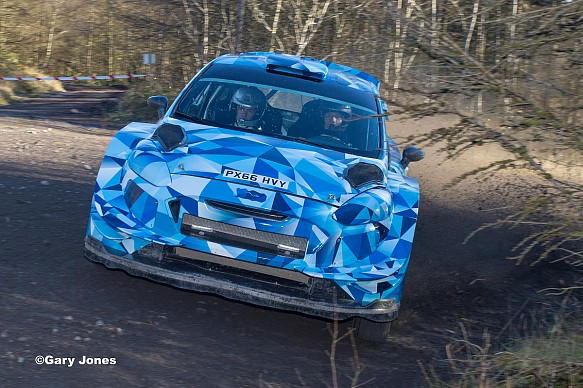 Sebastien Ogier tested a Ford Fiesta RS WRC for the first time in Wales on Friday.

The four-time world champion, who was left without a 2017 seat following Volkswagen’s departure from the World Rally Championship, was behind the wheel of his third World Rally Car in five days; having finished Rally Australia in his Volkswagen Polo R WRC, driven Toyota’s Yaris WRC on Wednesday and M-Sport’s 2017 challenger two days later.

Ogier and co-driver Julien Ingrassia arrived with M-Sport team principal Malcolm Wilson at just after nine on Friday morning and completed their time in the car in the afternoon.

As well as Wilson, M-Sport’s technical director Christian Loriaux was present, as was Ott Tanak – who could well be the Frenchman’s teammate if he joins the squad for next season.

There has been no official comment from Ogier or M-Sport regarding the test in Rheola forest. It’s estimated Ogier completed around 30 miles of running in the car at the Walter’s Arena section of the stage.

A source close to the test told Autosport: “It looked like the test was going very well. The body language between them all was really positive.

“Sebastien drove the stage in a road car, then did a steady lap in the rally car before he was at pretty much competitive speed. He looked very comfortable and actually came in and made some suspension changes. At one point it looked very much like a regular setup test.”

Ogier had been hoping to test all four 2017 World Rally Cars available for next season, but Hyundai’s Michel Nandan has confirmed that the i20 won’t be an option for him and his chances of tasting the Citroen appear to be fading fast as well, with the Paris-based firm reported to be struggling to fund a deal.