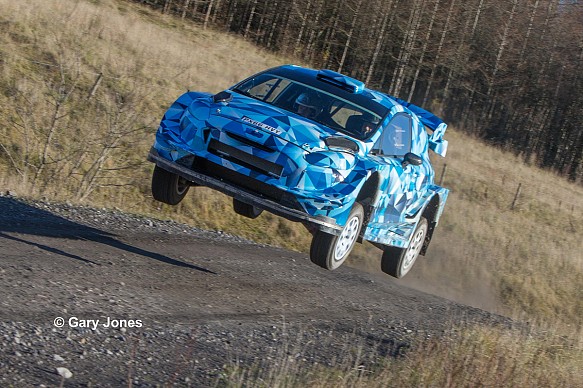 Having been freed from his Volkswagen contract in order to test alternative World Rally Cars for next season, following VW’s cancellation of its program, Ogier has driven Toyota’s Yaris WRC and the Fiesta in the last three days. Ogier flew into south Wales on Friday morning and spent much of the day driving the Ford in the Walter’s Arena section of the Rheola stage.

“The test went well. The car performed very well all day,” Wilson said. “I have to say it looked very impressive from where I was watching from – it was great to see Seb in the car.”

Four-time champion Ogier’s attitude and approach stood out to Wilson.

“People had told me before how straightforward and easy he was to work with and that’s just how I found him,” he said. “I was really pleased with the respect shown from him and Julien [Ingrassia, co-driver] and our guys.

“The car started the test in the same setup it had been when Ott [Tanak] was driving it yesterday. Seb drove it like that, then came back and made some changes – he was keen to see how the car felt when he’d made some specific changes. And the good news was that the sun was shining!”

Wilson has made no secret of his determination to sign Ogier for 2017 and hopes the test moved a deal closer.

“He got a good kick of the ball,” Wilson said. “Now it’s back to the discussions which will continue next week.”

Toyota team principal Tommi Makinen declined to go into detail about Ogier’s time in the Yaris.

Although Ogier ideally wanted to test all four available 2017 WRC machines before making a decision, Hyundai has no space for him and Citroen has struggled to source the budget for a deal – and will not let him test without an agreement in place.