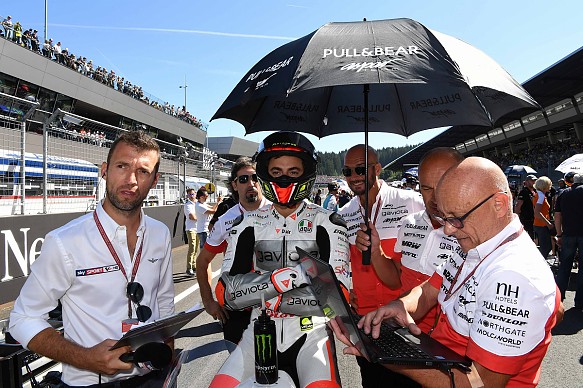 Moto3 race winner Francesco Bagnaia will return to Valentino Rossi’s junior squad next year when it moves up to Moto2.

The Italian is currently fourth in the Moto3 standings, having claimed his first victory at Assen in June, which was also a breakthrough result for Mahindra. He raced with Rossi’s VR46 team in his second season in Moto3 in 2014, finishing 16th in the championship with a best race result of fourth at Le Mans.

While Bagnaia moved to to the Aspar-run Mahindra project last year, he has remained part of Rossi’s young rider academy.

“I am happy to be able to reach another milestone of my career at Sky Racing Team VR46,” the 19-year-old said. “Moving to Moto2 is a great opportunity for growth. I am proud to be able to face this new challenge with a team that for me is like a family.”

Bagnaia is the first rider signed by VR46 for its first Moto2 campaign, while the team is yet to confirm which chassis it will run. The lead bike had been earmarked for Romano Fenati, but he has now split from the team after being suspended last weekend in Austria.

“We will continue in Moto3 with two KTM machines, and we will redouble our efforts in the intermediate category of the world championship,” team manager Pablo Nieto said. “The line-up of the Moto2 team will be completed later, but we are happy to have Francesco Bagnaia back with us once again.

“After the interruption of the relationship between the team and Romano Fenati, we have decided to continue with our initial project of two Moto2 machines. We will take a few weeks to decide who will join Bagnaia in this new challenge.

“We’re motivated to accompany ‘Pecco’ in this change of category and will put all of our commitment and professionalism into the project.”

From the British Grand Prix next month, Lorenzo Dalla Porta – already signed to race with Mahindra in Moto3 in 2017 – will replace Fenati in VR46’s Moto3 line-up.