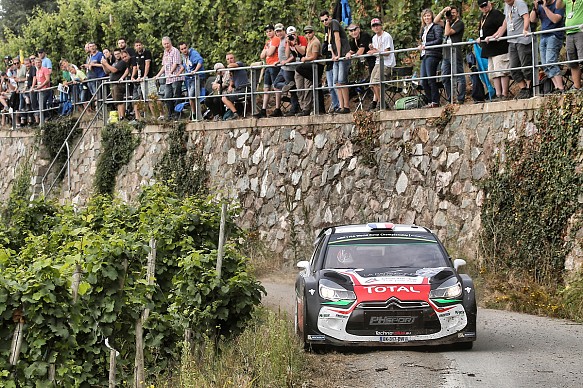 Rally Germany was halted after Stephane Lefebvre and co-driver Gabin Moreau were injured in a crash on the Panzerplatte stage.

The PH Sport Citroen crew crashed in the first quarter of the famous stage on a military testing range while running sixth overall. The stage was stopped and medical crews sent to the scene of the accident.

A statement from rally organizer the ADAC said both Lefebvre and Moreau were hurt in the crash.

“During the Deutschland Rallye, an incident occurred on SS10,” said the statement. “The car with starting number 10 slid off the road. Driver and co-driver were injured.

“Medical staff are on site and provided assistance. No spectators were involved in the incident. The stage was stopped and the competitors will be making their way back to Trier.”

Lefebvre has been part of Citroen’s part-time program this year as he and Craig Breen are assessed for drives alongside Kris Meeke when the manufacturer makes its fully-fledged return in 2017.

Germany was not part of the Abu Dhabi-backed semi-works Citroen program, but PH fielded Lefebvre as a private entry.