Four-time IndyCar Series champion Scott Dixon cannot believe it is already a year since Justin Wilson’s death, as the championship returns to Pocono Raceway this weekend.

Wilson was killed when he was struck by the nosecone from Sage Karam’s crashed car during the 2015 race at the track on Aug. 24 last year.

“No, it doesn’t seem like a year,” Dixon told Autosport. “It’s definitely going to be a trying weekend for a lot of us and just emotionally.

“Obviously, we all love racing. The circumstances that we lost Justin were almost inconceivable and the chances of that happening were so slim.

“Most of us think of Justin a lot and this weekend we’ll be thinking even more about him and Julia [his widow] and Jess and Jane [his children] and Keith and Lynn [his parents] as well. The year has slipped on by rather quickly. I wish things were different.”

“Everything changed within a half an hour after the end of that race,” Hunter-Reay said. “It’s tough because before the race Justin and I shared the back of the truck that took us around during driver introductions. We were joking around and had a great time before the race. That’s the last memory I have of him.” 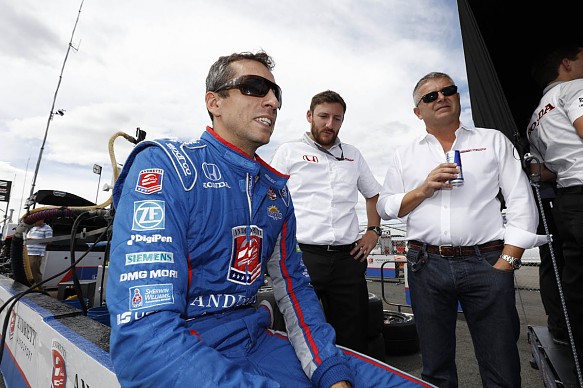 Karam was leading the race when he lost control of his Ganassi Dallara-Chevrolet and smacked into the Turn 2 wall. he car’s nosecone flew into the air and struck Wilson on the helmet. The 37-year-old Briton (pictured above) never regained consciousness and died the following day.

Hunter-Reay added: “With Justin it’s not like we ever just brushed it off or we moved on. He remains a massive part of this family. He is a great friend, husband and father.

“No, it doesn’t feel like a year to me because he was so close to so many within our family, our group.”