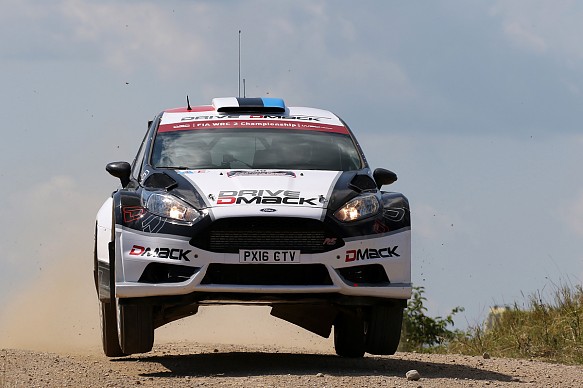 Ott Tanak maintained his Rally Poland lead into the final two stages as the weather turned wet on Sunday morning.

Andreas Mikkelsen nibbled into Tanak’s advantage on both the loop’s stages, but could not make sufficient inroads to bring the lead battle alive.

Tanak’s DMACK Ford holds an 18.6-second advantage over Mikkelsen’s Volkswagen going into the final loop. Although Mikkelsen’s pace didn’t help his victory bid much, it did bring him 12.9s clear of Hayden Paddon’s Hyundai to make second all but secure.

The rain created more of a shake-up further down the World Rally Car order. Stephane Lefebvre’s strong run for Citroen looks over after he ripped the left-rear wheel from his car with a spin on the Sady stage.

Sebastien Ogier slowed when the stage seemed to be briefly put under yellow flag conditions for Lefebvre’s accident, even though the Citroen was still limping slowly through. Backing off left the puzzled Ogier 18.3s behind VW teammate Jari-Matti Latvala in sixth place.

Craig Breen moves up to seventh with Lefebvre’s accident after the two battled closely all weekend. The Irishman hadn’t been in a World Rally Car for two year’s on gravel. His last WRC outing was Sweden in February.

Dani Sordo produced his most competitive form of the weekend so far to close right in on Mads Ostberg on the morning’s opener, but must now make post-stage repairs to his Hyundai after clouting the hay bales marking a chicane on Sady. Assuming he can continue, Sordo will be within 3.1s of Ostberg in a battle for what is now ninth behind Eric Camilli.

Sordo’s teammate Thierry Neuville also had an excursion at the same chicane but remains a comfortable fourth.