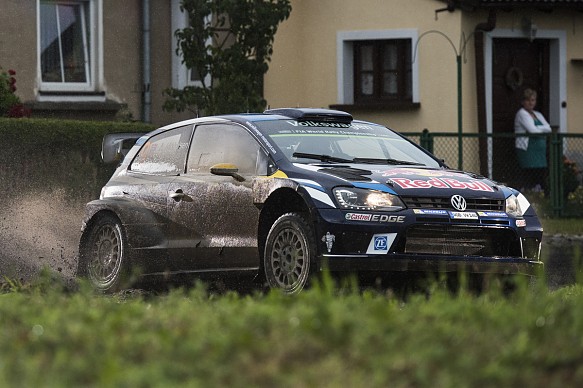 The pair had been embroiled in a lead battle, joined by Hayden Paddon, for the whole weekend. By the end of Saturday it had looked like Tanak had done enough to secure a first WRC win for himself and the DMACK tyre brand, which would have also ended an M-Sport Ford victory drought stretching back to Rally GB 2012.

Tanak began Sunday’s final loop of two stages with an 18-second lead, but an impact early on the increasingly wet and rutted Baranowo stage damaged his right-front tyre and cost him 40s.

That dropped him to second behind Mikkelsen, whose previous WRC win had also come at the last moment, when Volkswagen teammate Sebastien Ogier crashed out of the lead on the final stage in Catalunya last year.

Mikkelsen and new-for-2016 co-driver Anders Jaeger came through to win by 26s as the despondent Tanak only just hung on to second – still DMACK’s first podium – ahead of Hyundai’s Paddon and Thierry Neuville.

Paddon fell away from the lead fight on the last day and nearly lost the final podium place to team-mate Neuville after admitting to backing off too much on the final loop where he was uncomfortable with the wet conditions and thought his 20s cushion would be enough.

Neuville got that gap down to just eight tenths of a second at the finish, and was left to rue a puncture during the penultimate stage. Only 14.1s covered second to sixth in the end after VW pair Jari-Matti Latvala and Ogier won the final two stages and regained ground.

Ogier had hung on just behind the podium battle on day one as running first on the road proved less painful than on recent events. But the Saturday stages were tougher and he tumbled to a distant sixth place.

Latvala moved in the opposite direction, gaining confidence as the weekend progressed after starting Friday a long way off the pace and then fending off Ogier for fifth in their late intra-team battle.

Craig Breen emerged on top of what he insisted should not be seen as a head-to-head with his rival for a 2017 Citroen drive Stephane Lefebvre.

After they had been tied together for most of the rally, Lefebvre gained an advantage with his first stage win on Saturday afternoon, only to then crash on Sunday’s second stage. Despite severe left-rear damage, Lefebvre and PH Sport were able to get the car repaired at service and he continued to finish 12th, while Breen was seventh.

Eric Camilli outperformed M-Sport Ford team-mate Mads Ostberg for most of the weekend only to lose eighth to the sister car when he damaged his rear suspension in a crash after the finish of the penultimate stage. Camilli limped home in ninth.

Dani Sordo was closing on them both on Sunday morning before damaging the front of his car on SS19 and then his rear suspension on SS20, the latter damage terminal.

That allowed Teemu Suninen to claim 10th overall as he won WRC2 in his ORECA Skoda after a hard-fought weekend battling M-Sport’s Elfyn Evans and works Fabia men Esapekka Lappi and Pontus Tidemand.