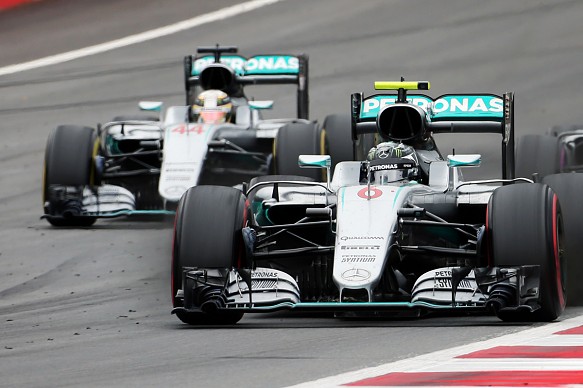 Nico Rosberg says being blamed by the stewards for his collision with Mercedes Formula 1 teammate Lewis Hamilton during the Austrian Grand Prix “sucks.”

Rosberg was handed a 10-second time penalty following a post-race investigation by the stewards into his last-lap clash with Hamilton. The incident resulted in then race-leader Rosberg finishing fourth due to damage sustained to his front wing, while Hamilton went on to win the race and close the gap in the drivers’ standings between the pair to 11 points.

Rosberg was also reprimanded by the stewards for continuing on track with a damaged car.

“I got penalized by the stewards for the incident I got 10 seconds, which doesn’t change my result, but they give me the blame, which sucks,” he declared. “I respect that, but I’m of a different opinion. It doesn’t help.

“I also got a reprimand for the broken front wing because it’s deemed dangerous. I tried to drive as carefully as possible.”

Rosberg said he now has to pick himself up swiftly with the British Grand Prix looming next weekend.

“It’s really hard to get over something like that because I had the win in the bag – I was convinced I’d win it,” he said. “Then to lose it like that on the last lap, especially in those circumstances, that’s a pretty tough one.

“I’m really gutted also for the team because it’s so bad every time when we collide like that. It’s terrible. It’s really the worst thing that can happen.

“I didn’t lose that many points today, but for the team it’s really not good. I’ll try and forget it as quickly as possible, and enjoy some family time, and then the next race comes up so quickly. I just want to come back strong again and go for another win.”

Hamilton, meanwhile, hopes after two incidents between the duo in the past five races they again knuckle down to clean fighting.

“I don’t go out to get involved in a collision,” said Hamilton. “As you’ve seen, I drove as wide as possible within the white lines, so I left a larger space. Three cars could’ve gone on the inside there, so…

“The team want to finish first and second. That’s our goal, and I want to be at the front of that. But certain circumstances have led us to where we are today – we have a lot more races ahead, and we’re going to continue to race.

“We’re going to keep fighting and through these experiences there will hopefully be a lot less this year and they are just a blip.”