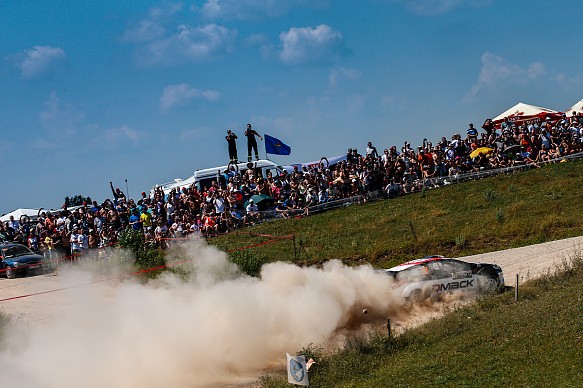 Ott Tanak will take a comfortable 21.3-second lead into the final leg of Rally Poland after the closing Andreas Mikkelsen lost a little ground with an error.

Quick times on the Stanczyki and Babki stages that opened Saturday afternoon allowed Volkswagen driver Mikkelsen to reduce DMACK Ford man Tanak’s lead from 18s to 15s. But just as it seemed the lead battle might come alive going into the last day, Mikkelsen overshot a junction on the Goldap stage and lost nearly 5s to Tanak.

Mikkelsen’s second place is far from secure, with his mistake allowing Hayden Paddon’s Hyundai to end the day just 6.5s behind. Thierry Neuville remains fourth in the second Hyundai, despite his gear linkage coming loose and impeding his throttle pedal use during the afternoon.

World champion Sebastien Ogier did not lose too much more time from being first on the road during the second loop, but the best he can hope for when in a better position on Sunday will be reclaiming fifth from VW teammate Jari-Matti Latvala. The Finn’s confidence grew through Saturday and he is now 3.6s ahead of Ogier.

Stephane Lefebvre did his best to impress Citroen with his first career stage win on Babki, having pushed partly in response to losing time getting around a puncture-delayed Henning Solberg on the preceding stage. That burst of pace put Lefebvre 12s clear of eighth-placed teammate Craig Breen and kept him within sight of Latvala and Ogier.

At the foot of the top 10, Mads Ostberg steadily closed on M-Sport team-mate Eric Camilli’s ninth place through the day as both edged away from the muted Dani Sordo.