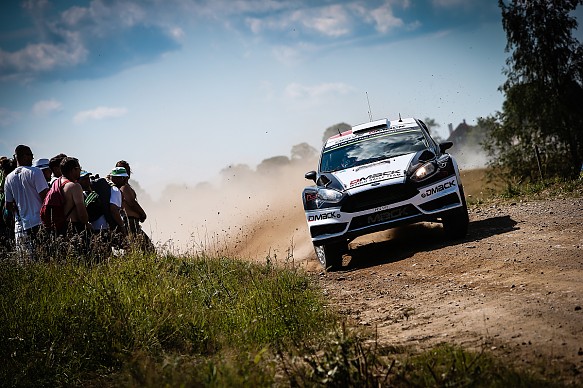 Tanak, rapid on this event in 2015, had already briefly led in the morning before losing a little ground and falling to third. For the second loop he decided to lighten his Fiesta by taking just one spare wheel rather than his previous two, and began a charge.

Three straight stage wins thrust him into the lead and, though Volkswagen’s lead runner Mikkelsen chipped a little time back towards the end of the day, Tanak retaliated by going equal fastest on the final stage of the day. He takes a 4.2 second lead into Saturday.

Hyundai driver Paddon initially fell away from the lead fight, less happy with his i20 as the ruts on the stages got deeper for the second run. But the quickest time on the last full-length stage, Stare Juchy, kept him in the fight and he remains 10.2s adrift of first place.

Reigning World Rally champion Sebastien Ogier is still just about in the hunt too, running first on the road proving less painful in Poland than it has on some recent events.

VW’s team leader is 16.3s away from the lead after equalling Tanak’s time on the Mikolajki Arena stage. The Frenchman is fourth overall, heading Thierry Neuville’s Hyundai.

Jari-Matti Latvala has struggled to get up to speed all day and is an increasingly distant sixth, 16.2s behind Neuville. He is battling with Citroen’s 2017 seat aspirants Stephane Lefebvre and Craig Breen, who swapped places multiple through the afternoon.

Lefebvre went 1.3s quicker than Breen on the last stage of the day to hold seventh ahead of the Irishman.

Eric Camilli remains clear of M-Sport team-mate Mads Ostberg at the foot of the top 10, while Dani Sordo picked up his pace in the afternoon but is still only 11th.