MOTOGP: Stoner feels Ducati made progress in his test

MOTOGP: Stoner feels Ducati made progress in his test 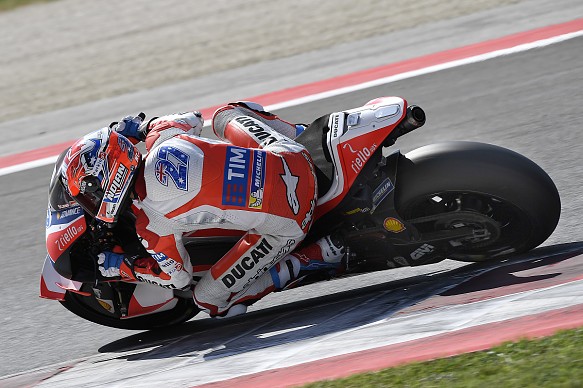 The two-time MotoGP world champion returned to Ducati this year from Honda, with which he had remained a test rider after retiring at the end of 2012. His first running at Sepang before and during the opening pre-season test was on Ducati’s 2015 bike, and his maiden session on this year’s Desmosedici in Qatar was limited by rain.

A two day test at Misano on Wednesday and Thursday was the first time Stoner has lapped on a European venue since retiring.

“We’ve had a very positive test,” the Australian said. “It’s been a long time and it’s really nice to ride these European-style tracks again and get a feel for what a bike is for basically 70 or 80% of the season.

“Everything we have done has been very positive, we got 95% of our test done over these two days so it’s been very good. We got some direction with Michelin and were able to get a bit of direction between the chassis and the electronics.”

Ducati’s race riders Andrea Iannone and Andrea Dovizioso have shown plenty of speed this year on the improved Desmosedici, but are currently only eighth and 11th in the points.

“I’m really looking forward to seeing what comes from this for the next stages and also what the factory riders really think of the steps we’ve been able to make,” Stoner added.

Aprilia was also at Misano, with British Moto2 rider Sam Lowes getting his first taste of MotoGP machinery before stepping up to the premier class in 2017.