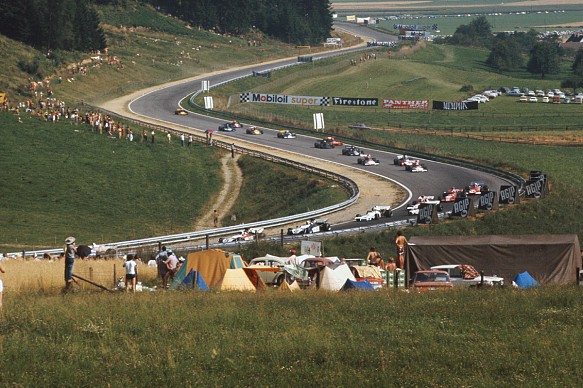 The re-opening of the western section of the old Osterreichring is under review, and could be in place for next year’s Formula 1 grand prix at the Red Bull Ring.

The circuit then closed and was revamped and renamed the Red Bull Ring – under the ownership of Red Bull magnate Dietrich Mateschitz – with F1 returning again in 2014 after an 11-year absence.

Consideration has been given to a potential return of the original track’s West Loop (pictured above at the 1972 Austrian GP) to the outside of the current layout’s Turns 1 and 2, with Red Bull consultant Helmut Marko recently saying that “at present, everything is still in the planning stage.”

Mateschitz would have to apply to the Styrian government to seek specific permissions for the re-use of the additional 1.6km of track that has been unused for motorsport for more than 20 years. If sought, and granted, it is understood resurfacing of the track, and redevelopment to ensure it reaches current F1 safety standards, would take only a matter of months.

Extending the circuit would open the door to the potential staging of a World Endurance Championship race, while for F1, lap times would increase significantly.

In first practice for this weekend’s Austrian Grand Prix, Nico Rosberg’s leading time of 1m07.373s was 1.5s faster than last year’s pole time courtesy of car development and the use of this season’s ultra-soft tires.

It is anticipated lap times could easily be lowered to 62 or 63 secconds for next year’s race given the changes in the regulations and alteration of the cars that will be running on wider tires.

Red Bull driver Daniel Ricciardo said he would like to see the circuit extended.

“There is the space, I’ve heard a few people talk about it, and it could be pretty interesting for us.”

Mateschitz, meanwhile, has shelved his plan to buy and own a second racetrack in Austria, the Salzburgring. He cited judicial reasons for his decision, as well as the actions of a local property owner regarding an area that is used as an entrance and car park.

“We intended to buy Salzburgring, though we did not have to. We can live without it. I have written a letter to the government of Salzburg stating we are no longer interested in buying.”