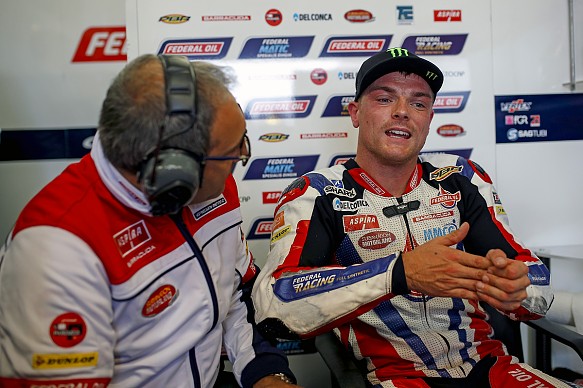 British rider Sam Lowes will test a MotoGP bike for the first time on Wednesday, before graduating to the championship in 2017 with Aprilia.

The Moto2 title contender signed his deal with the Gresini-run squad last year, and Aprilia has now confirmed he will be partnered in 2017 and ’18 by outgoing Suzuki rider Aleix Espargaro.

An initial plan that Lowes would start at Misano on Wednesday with Aprilia’s 2015 bike changed during the course of the Dutch TT weekend, and Lowes will now ride its current RS-GP on Wednesday and Thursday.

“We’re maybe going to have one less test than we’ve planned, just because of my schedule, so I think that we’re not going to waste time and go straight into the new bike.

“With the schedule and the times, I don’t want to be too tired or stressed out so we’ll test now and again after Brno and one day in Austria just to learn the track with the guys. That makes more sense to use the new bike straight away and they’re happy with that.”

A test at Valencia was originally planned, but its proximity to MotoGP’s flyaway races in October meant it was shelved so Lowes can focus on his Moto2 title campaign.

Lowes is five points behind joint leaders Johann Zarco and Alex Rins in the standings after eight races. He is confident the Aprilia running over the coming months will have him in good stead for when MotoGP becomes his sole priority in November, after the season finale.

“The main thing is, Aprilia pushed to me, I’m not testing the bike,” he said. “I’m getting used to the bike – it’s completely different. They’ve got a test rider. For me, it’s just, ‘Go on Sam, ride,’ no pressure from their side – I’ve not got to break the lap record, it’s just a ride.

“When you get on the bike after Valencia [in the annual post-race test], it’s impossible not to feel the pressure because you want to be at a certain level because everyone’s there, everyone’s watching.

“It’s timed, which is good;I like that, but it will be nice that that won’t be my first go. It takes a day to get used to any bike never mind one that’s twice as powerful and completely different.

“Moto2 is a great school for MotoGP, because of how hard you have to work to get the last little bit of last tenth. But they’re missing a lot of electronics and a lot of stuff that you have in MotoGP, so it’s still a big step.”