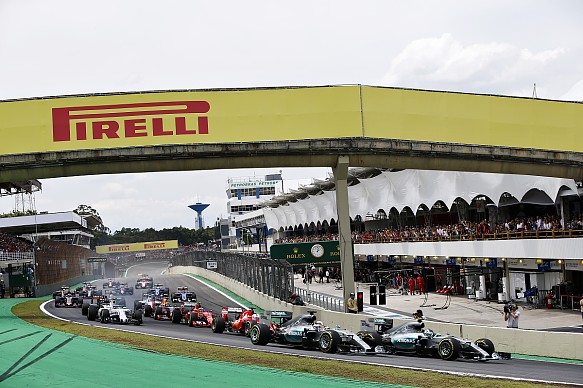 The Brazilian Grand Prix promoter has dismissed claims the future of race is under threat after Formula 1 boss Bernie Ecclestone said it may not take place after 2016.

The Interlagos race has a contract until 2020 but there have been criticisms of the facilities and in Baku, Ecclestone said of the event: “The chances are that it won’t happen next year.”

When asked about Ecclestone’s comments, promoter Tamas Rohonyi said: “Bernie is very fond of the Brazilian Grand Prix and Brazil. I know he has been anxious for a long time to see Interlagos developed more and more, so what he probably meant was he was very anxious this [work] should all be done as good as possible and we have assured him it is all being done.

“We have a contract until 2020 and a contract signed with FOM is cast iron – there is not much discussion. Even if due to the economic situation we find it difficult to pay our own costs here, we’ll have to do it.”

Interlagos is in the final phase of a redevelopment in which the track has been resurfaced and the paddock facilities upgraded. Rohonyi believes Ecclestone, who he said is planning on visiting Brazil “very soon,” will be satisfied with the work.

“After the first phase, he met the mayor of the city at the circuit and expressed satisfaction over what is being done,” said Rohonyi. “He understood this volume of work cannot be done in a single year because the circuit is used [regularly]. I’m confident when it is finished, he will look at it and say, ‘Wow, this is great stuff.'”

Rohonyi said talks about a contract extension are likely to happen in the week before November’s race and he is the confident the new mayor, who will be elected just before the GP, will back the move.

“In Sao Paulo, we’re on the seventh mayor since the race came back and we have never had any difficulty,” he said. “Every single one of them supported the grand prix and wanted to extend it. I imagine discussions about an extension will take place during the grand prix week. By the time the race takes place, we’ll have a mayor elected for the 2017-’21 period.

“We know the candidates who are running and every one of them has already said they are going to sit down with Mr. Ecclestone and try and extend the contract – normally it’s a five-year extension.”

Despite the economic situation in Brazil, which is mired in what financial analysts have described as the nation’s worst recession in 25 years, Rohonyi is confident F1 will remain in the country for the foreseeable future.

“These things do not affect an international race,” he said. “Brazil is going to hold the Olympics soon. There is nervousness about whether it will be ready – but I was in Rio on Sunday and it looks good.”