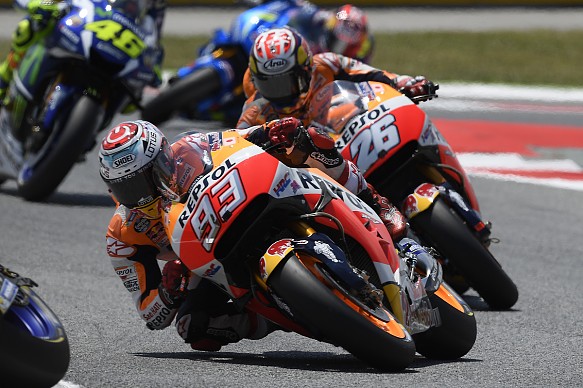 Teams and riders will stay on at Circuit de Catalunya for the year’s second official in-season test, a day after Marquez finished second to Valentino Rossi to reclaim the points lead from Jorge Lorenzo.

Honda has struggled with acceleration and cornering issues this year, as it has come to grips with MotoGP’s new control electronics package and tried to develop its RC213V. While its engine specification is frozen, it is looking to make further steps with the electronics and try chassis developments, which Marquez knows will define how it fares for the remainder of the year.

“It’s a really important test, for everybody but especially for us because what you try here normally you will have during all the season,” he said. “Then you have another test in Brno [in August, after the Czech GP], it’s more difficult there, so I look forward to Monday’s test.

“Compared to Qatar, we had a small modification on the electronics, but it’s exactly the same bike so we must still work. We still have some new items to try but we will see how it’s working on the points where we need more.”

Marquez is also buoyed by the upcoming run of circuits, starting with the Dutch TT at Assen later this month.

“The main target for me in this first part of the season was try to go from Catalunya as close as possible to the top guy, we are leading the championship,” he said. “Now we are coming to different circuits that we like much more.

“I was scared about some question marks after Mugello and Catalunya because these are two tracks that Yamahas work really good but we were [on the podium], so I feel a good confidence for the next races.”

Marquez’s factory Honda team-mate Dani Pedrosa converted his first front-row start of the year into his second podium, finishing third. While he was 28 seconds behind the winner when he took his other podium in Argentina, he was 6.313s behind Rossi on Sunday.

Pedrosa said he had actually started dipping into his range of new ‘test’ items during the grand prix weekend.

“I advanced my testing, I did some testing in the weekend from the parts we have for Monday,” he said. “This is because also a race weekend is for me more interesting testing than in only a test.

“Normally Monday, the grip is very good after race, you have more rhythm, lap times sometimes come even better so it’s not only related to the improvements. So testing on the weekend in the race against the other riders, it’s also sometimes very interesting.

“I don’t know exactly what we have planned, what’s left but we will keep on going from what we did already.”