Ozz Negri and the No. 60 Michael Shank Racing Ligier JS P2-Honda maintained the team’s impressive pace from the Roar Before the 24 test to lead Free Practice 1 at the Rolex 24 At Daytona. Drivers were greeted with a wet track but dry, overcast skies for the 60-minute session, Negri’s fastest lap (1:54.807) was nearly 15 seconds shy of the best turned at the Roar.

Second overall went the brand-new No. 62 Risi Competizione Ferrari 488 GTLM (1:55.078) (LEFT). Toni Vilander and his Michelin tires led the session until the MSR P2 moved ahead, and third overall went to another GTLM car, the No. 912 Porsche North America Porsche 911 RSR (1:55.267) piloted by Fred Makowiecki.

A red flag was required with five minutes remaining in the session after Spencer Pumpelly crashed the No. 16 Change Racing Lamborghini Huracán GT3 exiting NASCAR Turn 4. Pumpelly was evaluated and released from the infield care center. 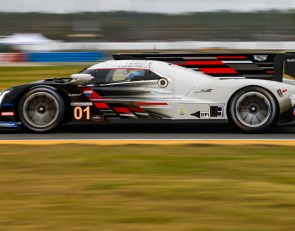