Rain fell throughout qualifying for all four of IMSA’s WeatherTech SportsCar Championship classes on Thursday, and with the intensity of the rain increasing as each class took its 15-minute turn on the 3.56-mile Daytona circuit, the GT Le Mans category – the only one with unrestricted tire regulations – dominated as the seven fastest laps went to Michelin-shod cars.

“It feels great,” Tandy told RACER. “It was interesting watching the PC and Prototype qualifying and thinking we could be fastest in qualifying overall for the Rolex 24. In those conditions, we have a good shot wherever we go. All we wanted from qualifying was to go quicker than the GTD cars. But then you go into qualifying, and go for it. It didn’t go too badly, did it?”

Despite Tandy’s achievement, IMSA’s rulebook dictates the starting grid will have Prototype leading the field, followed by PC, GTLM, and GTD, promoting Aleshin to pace the field on Saturday.

(Rule 40.1.4: If the Race Director declares that racetrack conditions warrant flexibility in tire type selection, Competitors may select the marked Dry OR the Wet tires as conditions dictate. Upon such declaration, the starting grid shall be ordered by class in the order P, PC, GTLM, GTD. Cars with faster qualifying times are gridded ahead of slower Cars in their own class, regardless of tire type used. Such declaration, or not, by the Race Director is Conclusive.)

Although warm weather and a dry track is expected for the race, Tandy isn’t ready to rule out another Petit-like result.

Aleshin has amassed significant oval experience in the Verizon IndyCar Series, but catching broadslides on Daytona’s banking during qualifying was a new—and extremely harrowing—experience for the Russian.

“It did not feel very nice,” he said as his eyes grew big. “The car was sliding very badly; I had to lift on the straights sometimes to keep the car safe.”

The final minutes of Prototype qualifying, which ended time trials, were done in a driving rain. Undeterred, Aleshin says he was curious what lapping the big 2.5-mile oval would be like in the dry. In his Indy car.

“This makes me wonder what how fast we could go in IndyCar,” he added with a smile. “I would very much like to try this.”

Mowlem was ecstatic after earning the 2015 PC pole, and says it still rates above today’s.

“I’m delighted for BAR1 Motorsports,” he said. “It’s not as sweet as last year; this was slightly different because a lot of the fastest guys didn’t qualify. The conditions were dreadful; I was aquaplaning in the corners, under braking, and on the banking, which I’ve never had before.”

One significant crash took place in qualifying when the No. 72 SMP Racing Ferrari 488 GTLM crashed at the end of the front straight, striking the tire barriers. The GTLM session concluded under the red flag as the car was extricated and the barriers were reconstructed. Change Racing did not partake in qualifying with the No. 16 Lamborghini Huracan after the crash it suffered in FP1 required more extensive repairs than were initially expected. DeltaWing also missed qualifying, but did so by choice. 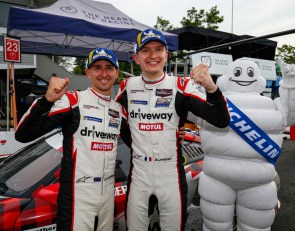 Topping the pyramid: GTP ride awaits those in Porsche program