Fernando Alonso has suggested he would like to finish his Formula 1 career as a McLaren-Honda driver.

Alonso, who rejoined McLaren from Ferrari for this season on a multi-year deal, revealed to reporters ahead of this weekend’s Chinese Grand Prix that he does not expect to drive for another F1 team before he retires.

When asked if he saw himself entering a team management role after his driving career ends, Alonso – who is now in his 15th season as a Formula 1 driver – replied: “I don’t think so. After 15 or 16 or 17 years of Formula 1 – whatever it will be – it’s enough.

“It’s probably the same example of the Ferrari time – I will close the loop, that part of my life. I started with McLaren-Honda when I was three years old – a replica of my father; I will finish with McLaren-Honda, but the real one in Formula 1, and that will be one third of my life.

“[It will end] with great experiences, great memories, great friendships, but the normal life will start that day when I retire, and I do not see myself as a manager here or following the sport. That will be enough.”

McLaren-Honda has endured a difficult start to the season, but Alonso, 33, said his priorities as a competitor had changed slightly as he has aged.

“Obviously, I would like to win because we are sportsmen and we are all competitive, but also thanks to this age, and thanks to the moment of your career, you start looking for other things,” he added.

“I’ve been lucky to win championships and to win many grands prix, and now sometimes I feel more happy and more proud of my job and my team doing the things we are doing now than winning a trophy.

“There are times when you arrive to a maturity and stage of mind that has different priorities in life.”

Fernando Alonso is no longer a spring chicken, so it’s perhaps natural that he should start to wonder what should happen when Formula 1 is no longer his life.

Alonso was certainly in a reflective mood on Thursday at the Shanghai track, as he revealed he has no plans to carry on in F1 after he stops driving, and suggested that McLaren-Honda would be the last team he would race for before retiring.

Unfortunately our conversation with him came to end before he could confirm this explicitly, but when asked directly (twice) whether he saw McLaren as the last stop on his F1 odyssey, Alonso simply smiled and nodded in the affirmative…

The Spaniard will be 34 in July and clearly knows his time at the pinnacle of the sport is closer to its end than to its beginning, though there is no reason why he could not continue for many more seasons – health and fitness allowing.

It seems he sees this latest “project” as his last great work. He explained clearly ahead of the season that the McLaren-Hondas of the late 1980s held a special place in his affections, and inspired him to become a Formula 1 driver in the first place.

Finishing his career with the team that started it all would be the perfect way to bow out and “close the loop,” as he puts it. And one gets the sense that being part of McLaren-Honda means more to Alonso than simple potential for (eventual) top results.

His priority seems to be to finish his career on a spiritual and emotional high, confident that – whatever the end result – he will have left an indelible mark on the sport he loves. 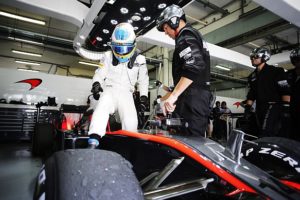