The two drivers duked it out for the win following the final restart, but a pass for the lead by Quiroga in Turn 8 on the final lapwould be short lived, as Blaney set up his crucial move exiting the final turn allowing Blaney to score his third career series victory by 0.049 seconds.
“That was a ton of fun racing with German,” said Blaney. “We raced really, really hard and really clean and that’s how racing should be. We had a problem last week (at Bristol) and just fate would have us racing each other for the win this week. That’s awesome. That’s what racing needs to be, it was so fun racing with him and battling it out with him.”

Blaney’s teammate Alex Tagliani led the field from the pole in his NASCAR Camping World Truck Series debut and held the point until he strategically made a green flag pit stop on lap8 with Gray Gaulding inheriting the lead. The NASCAR Next driver would control the field for five laps before he headed to pit road and handed the lead to Canadian Andrew Ranger.

When Ranger pitted on lap16, Blaney assumed command on lap17. Utilizing a one-stop strategy, he stayed out until lap29, when Quiroga shuffled to the top spot.

With the lead exchanging between Quiroga, Cole Custer and Johnny Sauter, crew chief Chad Kendrick’s early-race pit stop call would prove to be beneficial for Blaney, as he climbed from outside the top 10 to reclaim the lead from Sauter on lap44.

Blaney’s healthy lead over Quiroga would be diminished when the first full-course caution would wave on lap48 for the No. 8 of John Hunter Nemechek, who lost an engine in Turn 1. Under the yellow, the leaders elected to stay out, setting up for a restart twelve laps from the finish.

Quiroga couldn’t make the pass on Blaney on the restart, but he would get another chance when the second and final caution of the day waved on lap55 for Tagliani, who stalled on the track in Turn 5.

On the final restart, Blaney got a strong jump on the field and was able to clear Quiroga, but the Mexico City, Mexico native reeled him back in over the last eight laps before making his move in the Esses.

Coming out of Turn 10, Blaney made the crossover move to win his first race of the season. Quiroga matched his career-best finish in 42 starts.

“We tried hard, we came in second. I’m going to keep on trying,” said Quiroga. We were really, really fast on long runs. Everyone at the shop worked really hard to build a road course truck and that’s how we arrived. I think we were on the right path, just strategy and how things played out, Blaney was in front of us. I tried really hard to pass him, tried to make him make a mistake, he didn’t. I passed him in Turn 8, and Turn 9, coming off he got a really good run off the corner and beat us.”

Erik Jones was third followed by Gaulding and Ranger to close out the top five. 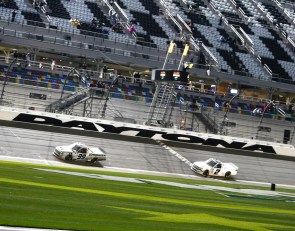 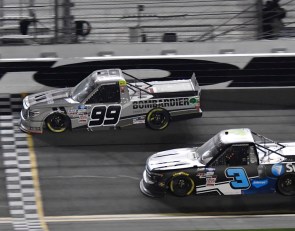