If you’ve already jumped from the edge of space and traveled faster than any other human, what do you do next? It’s not a question that many people face but for Felix Baumgartner it’s one he intends to answer by leaping into the drivers’ seat of an Audi R8 LMS for the Nurburgring 24 Hours.

The Austrian is getting his shot at one of motorsport’s most feted events, thanks to an initiative called the Audi Driving Experience in which a “gentleman driver” – as amateurs are known in the world of GT racing – is slotted into a team of professionals.

While Felix is a rookie, he’s not a complete newcomer to motorsports, having competed in rallying. “I think that experience will count for a lot at the Nurburgring, because I think the Nordschleife is a little bit like rally driving,” he said. “It’s not like a normal racetrack: it goes up and down, there’s a lot of hills, a lot of corners and conditions that can change swiftly. So, if you come from a rally background, it really helps.” 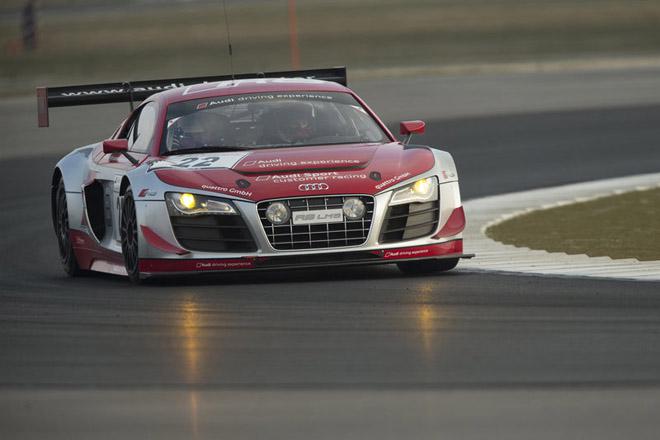 When Baumgartner was planning the Red Bull Stratos project he had Joe Kittinger, the high-altitude parachute jump record holder, as a mentor and coach. For the Nurburgring, he has former WRC winner Sepp Haider performing the same task.

“It’s pretty much the same relationship,” said Baumgartner. “He’s my driving coach and the relationship is like the one I had with Joe Kittinger. He’s a very calm guy and we’ve built up a relationship over the last six months. He’s helping me to develop my skills – so in that respect he’s very similar to Joe.”

While Stratos was a step into the unknown, Baumgartner went into it as one of the world’s most accomplished skydivers. He enters one of motorsport’s toughest events at a novice.

“Nobody thought a human could break the speed of sound – but I did it. And it’s the same with racecar driving. People criticize my decision. They say that with no race experience you cannot compete at the Nurburgring 24 Hours. But the Audi Driving Experience and myself have come up with the perfect game plan – and we have the opportunity to prove to everyone our plan works.”