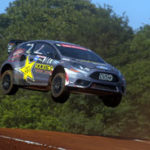 Brian Deegan will be the second American driver to contest a European Rallycross Championship event after agreeing to compete at Kouvola, Finland this weekend. The X-Games gold medallist will drive the Olsbergs MSE-prepared 550hp strong Ford Fiesta that he usually races in the Global Rallycross Championship.

Deegan will partner fellow countryman Tanner Foust, winner of the opening round at Lydden, and Finnish driver Tomas Heikkinen in Finland. Deegan’s entry was made easier as his car is currently based in Europe between X Games events in Barcelona (May 19) and Munich (June 30).

He finished fifth at the first round of the 2013 Global Rallycross Championship at X Games Brazil in April. The second round of the championship in Barcelona was canceled due to bad weather.

Last season, Deegan finished second to Foust in the American-based Global Rallycross series, visiting the podium at every event bar one.

The event at Kouvola, Finland gets underway with heats one and two on Saturday with the semi-finals and finals taking place on Sunday afternoon.