Pabst Racing announced that it has added driver Austin Cindric to its 2014 lineup. The team adds the 15-year-old, second year Cooper Tires USF2000 Championship Powered by Mazda driver to its team and is very optimistic, as the 2014 season quickly approaches. Austin will drive the No. 77 Nightrain Pabst Racing USF2000 car in both the National Championship and Winterfest series’.

Pabst Racing team owner and president Augie Pabst said: “I’m very pleased to announce our signing of Austin. He was able to learn so much in 2013 (his rookie season) and we will continue to build on that experience, which I believe will bring great results for 2014.”

As the son of Penske Racing president Tim Cindric, Austin has motorsports in his blood. In 2008, Austin began his racing career in INEX Bandoleros and then progressed to US Legend cars and the Skip Barber Formula Series prior to entering the 2013 season with the IndyCar development series, USF2000. He is looking forward to returning as a second year driver in the series with Pabst Racing.

“I am very excited to start racing again in the USF2000 Series. I have enjoyed getting to know the Pabst Racing guys and I am really looking forward to working with them. We have already created a solid relationship through testing and I look forward to having some success together!”

Cindric, a Columbus, Ohio native, currently resides in Mooresville, N.C., was the youngest driver in the Cooper Tires USF2000 Championship Presented By Mazdain 2013. Cindric is optimistic about the 2014 season after capturing two top-10 finishes and the Tilton Hard Charger Award in the final 2013 event in Houston.

“My goals for this year are to continue with the momentum that I had at the end of last season, to continue to learn about the car and the tracks, and to work up to my potential and my first USF2000 win. I have been preparing for my second season by doing a good amount of pre-season testing and driving not only in the USF2000 car, but also getting valuable seat time in karts, legend cars, an F3 car, a vintage Porsche 944, and more.”

Augie Pabst has been pleased with Austin’s performance in pre-season testing and expects great growth and performance this year from the team.

“Austin’s knowledge and maturity is impressive. He carries the right balance of getting down to business and focus without losing his sense of humor. Throughout our pre-season testing he has continued to show his commitment and ability to be competitive on all types of circuits; as well as conditions.”

Pabst Racing still has one seat available for a driver who is interested in pursuing the Cooper Tires USF2000 Championship Powered by MazdaNational Championship and Winterfest. 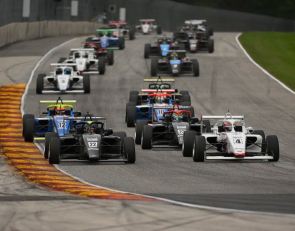