The GTD class of IMSA’s TUDOR United SportsCar Championship will likely provide as much entertainment as the all-pro GTLM class in the Rolex 24 at Daytona. And the SRT Viper GT3-R drivers have high hopes they can win on the car’s debut. Marshall Pruett reports. 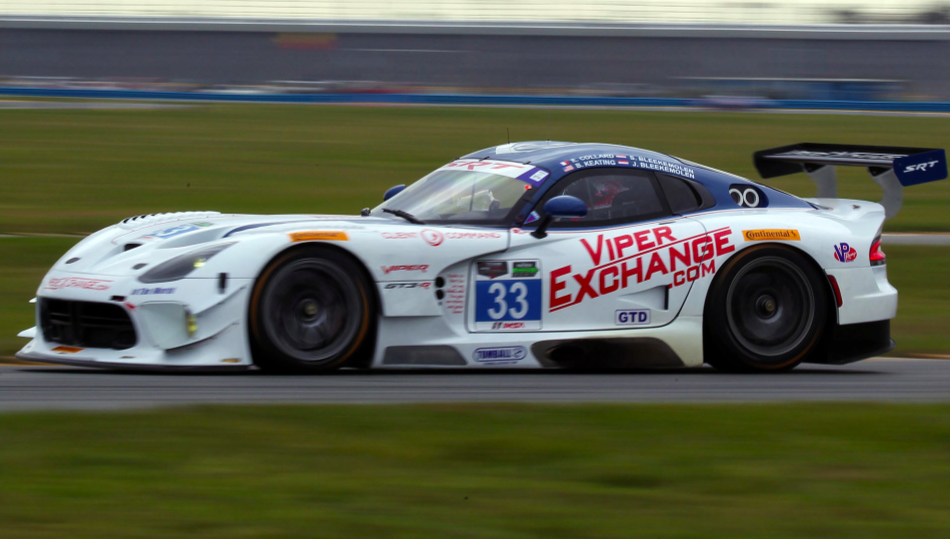 Ask the most hardened sports car racing veterans what they expect to come from this year’s Rolex 24 At Daytona endurance race and if you’re lucky, you’ll get a shrug and a “Ask me when it’s over” in response.

With so many new cars, classes, rules, not to mention the a new series—the TUDOR United SportsCar Championship—poised to take over Daytona International Speedway January 23-26, questions of how 67 cars and more than 250 drivers will fare in the great race could remain unanswered until the checkered flag waves.

Among the field of 67, the No. 33 Riley Motorsports-led SRT Viper GT3-R will make its competition debut at the Rolex 24. Built from the same chassis as the mighty SRT Viper GTS-R Le Mans racecars by Riley Technologies, the North Carolina-based constructor responsible for the GTS-Rs and running the factory GT Le Mans program, the GT3 version of the car draws from its production roots by design.

Aimed at pro-am classes, the GT3-R should benefit from the lessons that have filtered down from the GTS-Rs as the ViperExchange.com-sponsored car is put through 24 hours of arduous racing.

“It’s a brand-new car, so you never know exactly what to expect until you do a full 24-hour race, but I was pleasantly surprised and really happy with how testing has gone with the Viper GT3-R because it’s such a solid car with a lot of very good engineering built into it from all the work they’ve been doing with the Le Mans Vipers,” said pro racer Jeroen Bleekemolen, who’ll share the driving duties with his brother Sebastiaan, Emmanuel Collard, and car owner Ben Keating, who fulfills the amateur driver role in the operation.

Keating, who makes his living selling Vipers, wants to achieve his dream of winning the GTD class on his car’s debut, although from the sound of it, racing at the Rolex 24 in a GT3-R is a dream of its own for the Texan.

“This is my fourth Rolex 24, and I said to my wife last night: ‘If there’s only one race I can do a year, this is it.’ I’m more excited about this year’s race than ever before and that’s because every other year I’ve done it in a Porsche, and everything else I’ve raced and even my business is all about the Viper,” he said.

“Now I get to race what I sell; racing is my passion and Viper is what got me into racing. My wife bought me a pass to run my Viper at Texas World Speedway back in the day and that led me to where I am today. You take my favorite car and my favorite race and I have a dream combination. I was first in line to buy the first GT3-R, I’ve got chassis No. 1, and its first race out of the box is 24 hours and the second is 12 hours!

“It’s a tall order to bring a new toy out of the box into such a long race, and there are some question marks, but I couldn’t have more confidence in the Riley team and what they’ve put together for me and my teammates to drive. We want to win, of course, but this already feels like a win with what we’ve put together so far. I couldn’t be happier.”

The white and blue V10-powered coupe is the latest iteration of the Viper to race at Daytona, and after watching one of the older cars struggle at the Rolex 24, Keating is intent on raising the bar with the GT3-R.
“We’ve seen a Viper Competition Coupe race at the Rolex 24 a few times recently, but it wasn’t competitive; the rules didn’t allow it to show very much, and since SRT and Riley announced they were doing the GT3 version of the GT Le Mans car, I knew it was my chance to bring the right Viper to race at the Rolex 24,” he added.

“And because it’s a pro-am class, I don’t have to put together a team of all pros to fight the other pros. I get to race against the other guys who have day jobs and show how I compare…and I think I can hold my own.”

Keating’s bought the car he wants, hired the team he wants to run the car and brought in a stellar driver lineup to go after Rolex 24 glory. And thanks to the TUDOR Championship rules, he’ll play a central role in his team’s performance. Unlike some sports car series where the pros are allowed to do all the heavy lifting, Keating is looking forward to holding his own in the cockpit of the No. 33 throughout the Saturday-Sunday event.

“In the Rolex 24 race, the minimum drive time is going to end up being about five hours for amateurs like me, so it’s not a token thing where we drive as little as possible and the pros essentially do the entire race,” he explained. “It means guys like me really do have to do our fair share of the driving. We know the pros are quick, so it’s going to be down to guys like me to make a difference…and I like our chances.”