Horner: Half the field could retire in F1 opener

Horner: Half the field could retire in F1 opener 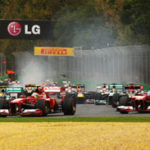 With teams under no illusions that reliability is going to be a key factor in 2014, Horner believes that the dropout rate could be pretty extreme early on.

F1 designers are facing the biggest change in regulations in recent history, and none are expecting it to be easy to get the new 1.6-liter turbo V6 power units up and running trouble-free straight away.

To further add to the technology complications, drivers are also limited to just 100kg of fuel for a grand prix, which could prove tough to manage in Melbourne, one of the highest fuel-consumption tracks of the season.

Speaking to Bloomberg TV on Wednesday, Horner has suggested that the situation could be pretty dramatic in Australia on March 16.

“I think you could see a very high retirement rate, maybe even 50 percent in the first race,” he said. “Fuel is a challenge this year because we are limited to 100 kg of fuel to start the grand prix with, but more reliability issues in the early races will be a key factor. And of course, we only have five engines for the whole year.”

Beyond the challenges of reliability that all teams will face, Horner fears that the better-resourced teams will pull clear of the midfield contenders this year due to the new rules.

“For the back of the grid it is a huge challenge with the costs that are going be incurred with this power supply unit,” he said. “The differences between the teams will be bigger.

“Whenever there is a reset, the teams that have the investment, that have the resources and the facilities will always turn up with a more advanced product.”

When asked if that could lead to a two-tier F1, Horner said: “I think next year [2014] it could be. That is why stability is so important, as if you have stability then the grid concertinas, and it is down to details. The regulations we have for this year are a definite game-changer.”

Formula 1 has got used to only a few cars dropping out of each grand prix through reliability reasons. In the last decade there have even been two races where there have been no cars dropping out at all – the 2011 European Grand Prix (24 finishers) and the 2005 Italian Grand Prix (20 finishers). The six cars that took to the grid for Indianapolis in 2005 also all took the checkered flag.

A 50 percent retirement rate in Australia this year would deliver something very different for F1, but the Melbourne race would have to go some way to beat the all-time record for the fewest classified finishers.

The most recent super-high attrition race was the 1996 Monaco Grand Prix (LEFT), where race winner Olivier Panis was one of only four cars to take the checkered flag. However, seven cars were classified as three others had completed the mandatory minimum race distance before being involved in incidents.

The all-time record holder for fewest finishers is the 1966 Monaco Grand Prix. Winner Jackie Stewart was one of only four cars classified, although fourth-placed Bob Bondurant was five laps down.