The Global Rallycross Championship brings its worldwide tour to New Hampshire this week for the first U.S. stop of its nine-round 2013 season. New Hampshire Motor Speedway at Loudon is a fitting homecoming for the young sport, after a successful 2012 debut there that saw packed grandstands and one of the most exciting track configurations of the season. This year’s event features another innovative track design and a stacked field including sport regulars Ken Block, Tanner Foust, and Travis Pastrana – who will do double-duty by also running the NASCAR Nationwide Series race at Loudon this weekend.

In Europe, where the sport was established in the 1960s, championship events take place on purpose built rallycross tracks. But this type of racing is new to the United States, having only debuted in 2010 at X Games in Los Angeles, and race organizers have opted for creativity in course design to bring the sport to fans around the world. So far this year, half-mile rallycross tracks have been built into a farmer’s field in Foz do Iguacu, Brazil, inside an Olympic Stadium in Barcelona (although that round was rained out) and in a parking lot outside a sports arena in Munich. The Loudon event returns the sport to a traditional motorsport venue, but the way the track is configured at the mile-long oval speedway is uniquely rallycross.

Rallycross courses feature mixed-surface dirt and paved tracks that typically include at least one jump where the cars can fly more than 70 feet through the air, and an alternate lap configuration known as the “joker” that adds an element of strategy to the frenetic door-to-door racing. New Hampshire Motor Speedway transforms the frontstretch and pit lane of its traditional oval into a rallycross configuration that integrates the 12-degree banking at one end of the oval, introduces a low tabletop ramp feature to the middle of the front straight, adds a tight, elevated hairpin turn that brings the cars at speed over the pit lane wall on each lap, and drops dirt over a third of the course, with a massive jump that’s a story off the ground. Drivers love the course’s innovative design and mix of flat-out straightaways and technical elements, and fans can’t believe the radical transformation of a conventional NASCAR facility to a course where jittery, high-strung cars hit 100mph, turn on a dime, and fly through the air.

New for 2013 is the addition of a development class of racer known as GRC Lites. The spec race series features 310hp, naturally aspirated, all-wheel-drive cousins of the 600hp rallycross Supercars driven by series stars. The companion series will run at all five of the domestic rounds of the 2013 championship, and is intended to offer a more affordable competition forum for up-and-coming drivers.

The GRC Lites entry list for the New Hampshire round features nine drivers – including a few young competitors who aren’t even old enough to have a conventional drivers’ license, like 15-year-old Mitchell De Jong, a rising Red Bull star.

The New Hampshire round of the Global Rallycross Championship will be telecast Saturday at 7:30 p.m. ET following the Nationwide race. 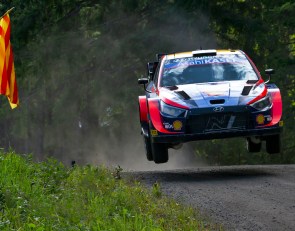