Tens of thousands of motorsports professionals joined exhibitors for one of the most successful opening days in the 26-year history of the annual PRI Trade Show, which returned to Indianapolis in 2013. The event is widely viewed as the three biggest business days in racing, and that label proved true once again at the Indiana Convention Center on Thursday.

“We had a great opening day,” said John Kilroy, PRI Trade Show producer. “The PRI Grand Opening Breakfast was very well attended, and then the exhibition hall was packed with attendees.  Most importantly, people were buying, and that’s why we’re herefor racing companies to do business.”

As the doors opened, buyers flooded the Trade Show floor to find the latest technology and newest products, many of which were introduced for the first time.

“The show’s been great,” said Ford Racing’s Jesse Kershaw. “We had the opportunity to bring the 2015 Mustang here that was just unveiled globally a week ago. It’s a great chance to show the new body to the racers. The traffic has been awesome. Our booth was packed this morning. Being in Indy is really good for us.”

A similar refrain was heard throughout the show floor.

“It’s been phenomenalthis has been the biggest upsurge we’ve seen in a trade show in a number of years,” noted Jeff Anderson of Moser Engineering, which manufactures aftermarket performance rear end components for various racing applications. “It’s a very pleasant surprise.  Coming to Indianapolis has been golden for us.”

The overflow crowd was especially evident on the high-end Machinery Row.

“The show is going very well for us,” offered Eddie Williams of MSC Industrial Supply, which saw its metalworking machines in great demand. “We’re getting a lot of traffic, some unexpected traffic. We’ve done a number of orders. People are buying and the Internet access has been great in doing business. We’ve had a lot of engine builders.”

As pleased as the exhibitors on the floor were, the Indianapolis community was just as happy to see the PRI Trade Show’s return; its last year in Indy was 2004.

“The entire Indianapolis community is just thrilled to have the PRI Show back,” proclaimed Leonard Hoops, president and CEO of Visit Indy. “PRI belongs in Indy. We’re almost joined at the hip. This is the capital of racing. The coming together of PRI and IMIS, and SEMA bringing them to Indy, it’s an incredible benefit for everyone involvedfor the hardcore racing community, for the attendees here and for the community of Indianapolis.”

The 26th Annual PRI Trade Show features the latest products and technology from over 1200 manufacturers of racing and high-performance automotive components, as well as precision machining equipment. The show is expected to bring well over 40,000 racing professionals from across the US and 72 countries to the Circle City. For more information, visit www.pri2013.com. 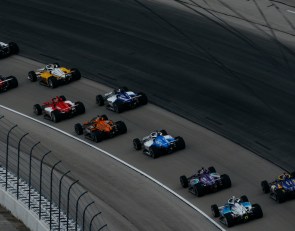