Kuno Wittmer: Going for gold with the SRT Viper in 2014

Kuno Wittmer: Going for gold with the SRT Viper in 2014

From a driver’s point of view, having a full season racing with the SRT Viper GTS-R under our belts was something that we needed in order to really understand where we stood. We have so much talent in this team, from the top of the organization down, and there’s so much experience, too, but all of that doesn’t mean you will automatically become successful the minute you hit the track. We had to learn the car and how to win with each other.

The four races we competed in back in 2012 gave us some pointers on where we needed to be heading, but we were looking to the 2013 season to complete something meaningful, and I’d say we did that in a way we can all be satisfied with. But satisfaction isn’t a place where we spend very much of our time.

Where we did spend time was being very honest about how to make our cars better, how to make ourselves better. The good thing was that we didn’t have any big weaknesses or deficiencies, but there were many details we could improve. From where I sat (literally), maybe the biggest was driver comfort and seating for the longer races. The molding of the seat, the way the steering wheel is positioned, each switch on the panel every little detail is important from a driver’s perspective. It’s something we improved a lot over the season, and it’s still ongoing. We’ll still be looking for improvements as we head to Daytona in January, because everything done to help the drivers extract the ultimate performance from the Vipers makes us faster and more consistent, every single lap.

From my point of view, physically the car is becoming easier and easier to drive as we develop, which is really important for the driver because 24-hour races and 12-hour races are physically exhausting. Bill and Bob Riley keep doing really, really good work with that to make sure the SRT drivers aren’t too tired after two or three hours.

As far as improving the engine is concerned, it is what it is. We’re regulated by the series to run a certain restrictor and that’s fine. I think we’re given something that we can respect and I strongly believe that we have a great package that’s allocated to us and we need to keep working on it as a team. 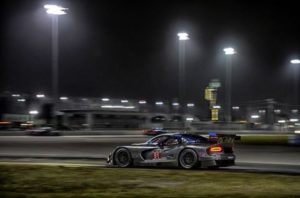 Same goes for the rest of the car, obviously. There’s a lot of improvements that have gone on throughout the 2013 season aerodynamics, suspension work, brake work and even after the season at Daytona and Sebring. What we’ve been working on will, we hope, benefit us at all the tracks including Le Mans.

Even during the Balance of Performance testing, we learned new things. For example, we made a lot of progress with the aerodynamics at Daytona International Speedway, a track that a GT Le Mans-class car has never driven. The track is really, really different from the other tracks we’ve been to.

I strongly believe that in 2014 we’re going to have a very nice package, a very, very strong car. Not necessarily in the straightaways because of the engine restrictors, but I do believe strongly in the handling department, especially on the high-speed track at Road America, where we’ve improved because of our team work with SRT and Riley Technologies.

There’s no magic formula for winning in this class; it’s all about the constant work and effort being put in by everybody to make everything just that little bit better the aerodynamics, the suspension, the brakes, the drivetrain.  Added together, it can become the winning formula. I won’t say we have that formula perfected yet, but I feel like we are close, and we’ll soon find whatever is missing.

If you ask me what will make a successful 2014 for us, I’ve got to say it’s definitely championship time nothing less is enough. Success in the GT Le Mans class Drivers’ Championship and Manufacturers’ Championship is our top priority. We aren’t aiming low. And starting off with the Rolex 24 at Daytona, there’s no doubt that we want to finish the race on a very high note with both GTS-Rs finishing at the front in the GT LM class, that is for sure. And while we’re talking Viper and teamwork, it would also be nice to see our sister car in the GTD class, the Viper GT3-R, win its class, too!

From my point of view in the program, I want us to win the championship by pushing as hard as we can and winning as many races as we can. I think there is good team spirit among the drivers because we all share the same dream. We’re always together, we’re training together, improving together; certainly we’re physically ready to go out there and finish one-two.

That’s our vision for the 2014 championship. Thanks for reading and supporting SRT Motorsports!