On track, Nico Hulkenberg has done absolutely everything he possibly could to prove he has what it takes to cut it right at the front of the Formula 1 field.

Yet after four seasons as a grand prix driver (one of those ‘resting’ as a reserve after being dropped by Williams) he is facing the prospect of another season with a midfield team.

Force India is an extremely effective race team, but it is not one of F1’s behemoths. If the Mercedes engine is stronger than the rest and the Silverstone-based squad does a good job with its car, he could certainly get some good results. But it’s fair to say he won’t be winning the world championship in 2014.

The team will be delighted with the signing. Hulkenberg showed during the second half of last season that with a decent car, he can excel. His drive in the Korean Grand Prix, holding off first Fernando Alonso and then Lewis Hamilton, was first rate.

Not only was he quick, but had the strength of mind to leave the door wide open into Turn 1, knowing that if he defended he would be a sitting duck. It was a masterclass of racecraft.

This was not an isolated incident during 2013. Even during the first half of the season, he drove extremely well, it was just that he was in a Sauber that was not particularly competitive until the rear end upgrade introduced in Hungary.

So why isn’t he in a top drive? Well, there are legitimate concerns about Hulkenberg’s weight given the demands of the 2014 regulations. A tall driver, he couldn’t shave off much more weight without starting to lose whole body parts.

There have also been some questionable decisions in the past, notably choosing to move from Force India to Sauber in the first place, which meant his profile was low in the first half of this year when the big teams were thinking about their lineups.

That arguably played a part in him missing out on the Ferrari seat to proven quantity Kimi Raikkonen, especially as the relationship between Sauber and Hulkenberg, early in the season, was a little rocky.

The third factor is the economic situation. In the times of plenty, he’d be on a three-year deal with a big team being paid $10 million a year by now. 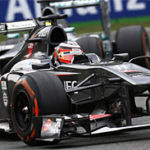 But Force India wasn’t worried about any of this, instead focusing on the fact he can be relied upon to deliver not just a few great races a year, but a lot of them during a season.

The team knows how good he is and will realise they have a driver capable of exploiting any opportunity to overachieve that he is presented with. The Brazilian Grands Prix of 2010 and 2012 prove that.

All credit to Vijay Mallya’s team for having the courage to sign a driver of the highest caliber on merit at a time when there are plenty of accomplished drivers on the market. This is exactly what an upwardly-mobile, well-run team should be doing.

For Hulkenberg himself, it feels like another season of treading water. All he can do is keep doing what he’s doing, carry on giant-killing and hope that he is recognized as what he is – a world champion in waiting.