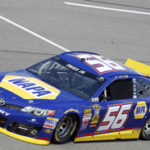 NASCAR team Michael Waltrip Racing will lose one of its title sponsors at the end of the year in the wake of the Richmond Sprint Cup race-manipulation scandal.

The team was fined $300,000 and general manager Ty Norris suspended after being found guilty of trying to manipulate the finishing order of the race at Richmond, at which the final positions for the Chase were decided.

A statement from sponsor NAPA on Thursday read: “After thorough consideration, NAPA has made the difficult decision to end its sponsorship arrangement with Michael Waltrip Racing effective December 31, 2013.

“NAPA believes in fair play and does not condone actions such as those that led to the penalties assessed by NASCAR. We remain supportive of the millions of NASCAR fans and will evaluate our future position in motorsports.”

Team co-owner Michael Waltrip insisted that his team was not immoral following the penalties.