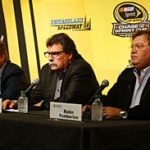 ASCAR has issued new guidelines to drivers and teams as it bids to stamp out the race manipulation that marred last week’s Richmond Sprint Cup round.

The clarifications were outlined by NASCAR chiefs Brian France, Mike Helton and Robin Pemberton in a meeting with Cup drivers at Chicagoland on Saturday, ahead of the opening Chase race at the track on Sunday afternoon.

A new rule has been instituted saying that “NASCAR requires its competitors to race at 100 percent of their ability with the goal of achieving their best possible finishing position in an event.

Helton listed “offering a position in exchange for favor or material benefit; offering material benefit in exchange for track position; directing a driver to give up a position to the benefit of another driver and intentionally causing a caution” among the prohibited practices, as well as deliberate crashes or collisions or withdrawing from a race to benefit another competitor.

NASCAR chairman France said a watershed moment was reached at Richmond, where Michael Waltrip Racing was heavily penalized for interfering with the race result and Penske and Front Row were investigated for potential collusion.

“Circumstances happen that are unhelpful in the credibility category,” he said. “What we’re about is the best racing in the world with the best drivers giving 100 percent of their ability.