Toro Rosso duo both say they're ready for Red Bull

Toro Rosso duo both say they're ready for Red Bull

Toro Rosso F1 drivers Daniel Ricciardo and Jean-Eric Vergne both believe they would be ready to step up to the Red Bull team next year.

Ricciardo, who has raced in Formula 1 since the 2011 British Grand Prix, and Vergne, now in his second season, are both contenders to take the seat that will be vacated by Mark Webber at the end of the season.

When asked whether he felt ready to make the step up, Ricciardo replied “yes”, while Vergne said, “Definitely — it’s a team I would love to race for.”

Q. What is your reaction to the news?

Daniel Ricciardo: I saw it on Twitter. I was a little bit surprised. For the last few years everyone has said it is going to happen this year, so it wasn’t a complete shock.

Q. There is an open seat at Red Bull…

DR: That’s come up, so… unfortunately I have had a pretty poor run the last two races so that will be my priority, to get some results back on the board. I haven’t come off a strong few races to say, ‘That’s mine everyone’ and I’ve got to focus on the next few weekends to remind everyone that I am here to be successful. Hopefully those results will show soon and we will see what happens. 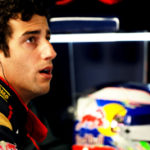 Q. Do you feel ready for the Red Bull drive?

Q. Do you see this as a straight fight between yourself and JEV or do you feel the team might go for an established name like Kimi Raikkonen?

DR: I have no idea. In the perfect world, they would love one of us juniors to go through and to do what Seb did. That’s the philosophy of the program and they would love to see one of us really shine, get a really strong run of races, turn heads and that will make the decision easy for them.

If they end up choosing someone like Kimi, OK he is experienced as a world champion and they are a world championship-winning team and you can’t argue with that. I have got to make sure I get the next few races the way I want them to go and then at least I can say I did all I could.

If I can get Silverstone, Nurburgring, Budapest, if I can get three great results and exceed the expectations of the team I don’t see why it wouldn’t put me in a good position. As long as I do all that and tick the pretty big boxes, I have got it all in my control.

Q. Now you know Mark is going, does that increase the pressure?

DR: To be honest, no. This is always that time of the season anyway, even if nothing is confirmed. It makes everything more of a reality, but reality was always going to be at this time of the season! Deep down, it doesn’t really change.

Q. The last two weekends have probably been your best in F1. With the opportunity opening up at Red Bull, do you feel that is good timing to hit form?

JEV: It is always better to be in good form than not. But the other thing is that I haven’t changed anything from the beginning of the year. I worked a lot this winter, I changed many things and the first races were exactly the same as the later ones, it’s just I had a lot of bad luck — crashes, punctures, failures and things like this. The last two races, I did not have any bad luck and just did a good job to get two good results.

Q. Do you see it as a straight fight between you and Daniel or do you think the team might go for a big name like Kimi?

JEV: I don’t look at this. I am here to do the job I am doing at Toro Rosso, I’m not looking at what everyone else says and what could happen. If I start thinking that maybe I could be in the world champion car, maybe I could stay here, maybe I could go somewhere else, you lose focus and that is not what I want.

Q. Are you surprised Mark has decided to leave F1 now?

JEV: I am not surprised in the same way as I would not be surprised if he stayed. It is his career, it is nothing to do with me.

Q. Would you be ready for it if Red Bull said to you you have the drive?

JEV: Yeah, definitely. It’s a team I would love to race for. Red Bull gave me my chance to arrive in F1 and gave me this opportunity. To race for the people that gave you the opportunity is something amazing, but as well to race for the world champions would be even more amazing. But I am not thinking too much about it now.

Q. Daniel has said that he is going to really try and do everything he possibly can over the next three races — do you think you have three races to convince Red Bull?

JEV: I don’t know. I’m not thinking of it. They are normal races for me. I always try to give my best and I am not going to change anything now just because Mark decided to leave his seat. It doesn’t change anything for me.