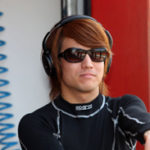 Kimiya Sato has played down the chances of his Sauber Formula 1 test leading to a greater involvement with the Swiss team.

The Auto GP title contender is currently the best-placed Japanese driver in European junior racing, with Honda’s return to F1 with McLaren a year and a half away and the firm traditionally keen to assist drivers from its homeland.

Sato will drive for Sauber in the F1 young driver test at Silverstone on Friday. But the team announced earlier this week that 17-year-old Sergey Sirotkin would be put on a development program toward F1 as part of Sauber’s new deal with a trio of Russian companies. It also has highly rated Formula Renault 3.5 champion and GP2 race winner Robin Frijns on its books as third driver, so opportunities for Sato could be limited.

“It’s too early, and maybe not the right timing, to say if this test will be the start of a longer relationship with Sauber,” Sato said. “Of course, if I get the chance I’d be really happy to get more Formula 1 testing opportunities, but I can’t confirm anything.”

The 23-year-old Japanese driver currently shares the Auto GP points lead with Sergio Campana, and said he had to focus on his present championship before thinking too far ahead.

“I think I need to get, minimum, a top-three position in the Auto GP championship at the end of the year,” Sato said. “For next season, the priority is to keep racing single-seaters. I also want to step up to a higher level, the ideal would be to stay in Europe.”

“I think F1 is going to be a completely different world,” he said.

“I had thought that it might be around 10 seconds a lap quicker than Auto GP, not that much difference, but when I looked at the times from the race weekends it was actually 16 seconds faster.

“It is difficult to imagine how the car will feel and the speed. I think I can drive with not much pressure on me at the beginning, and then I will take it step by step to improve.”