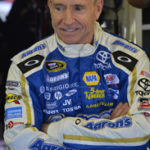 Mark Martin says that he feels “honoured” to have been given the call-up to replace the injured Tony Stewart in the #14 Stewart-Haas Racing Chevrolet for most of the remainder of the NASCAR Sprint Cup season.

Martin, who spent the opening part of this year contesting a partial schedule with Michael Waltrip Racing, will drive the car in 12 of the final 13 races, with Austin Dillon set to take the wheel at Talladega.

Stewart has been sidelined by a broken leg following a sprint car accident last month.

“I’m incredibly honoured,” Martin said. “Sometimes I have a hard time understanding how Tony could possibly feel that way towards me when the guy is so amazing; the modern-day AJ Foyt.

“When I was growing up, AJ drove anything and everything and was fast and won in everything he drove. And Tony is the guy today, and is successful at it.

“I’m really sorry that it comes at the expense of Tony getting hurt and I’m really grateful for the co-operation of so many parties to get this deal done – I haven’t seen that in the past.”

“Obviously we’re still racing for a spot in the Chase with the #39 car of Ryan Newman, and we’ll do the best we can with owner points,” he said.

By keeping one guy that has a lot of experience in there like Mark, I think it gives us our best shot.”

NO RUSH FOR STEWART RETURN

The current prognosis is for Stewart to return to the cockpit for the start of next season, but Zipadelli said that the team would continue to monitor his recovery and had no intention to rush his return.

“We expect a full recovery by Daytona, or close to it,” he said. “It may be able to be done earlier, but, it’s just not worth it.

“It’s a bad break to the leg, and he needs time to go through the process of healing and rehabilitation.

“With Mark coming on board, it gives us the window to go to the end of the year feeling like we are doing the best job we can to fill Tony’s shoes.”