Alberico doubles up in Mid-Ohio USF2000

Alberico doubles up in Mid-Ohio USF2000

Neil Alberico has had his share of disappointments this season, failing to finish in three of the first four races, but since then the 20-year-old from Los Gatos, Calif., has been on a tear. Two victories Saturday one on a diabolically wet track in the morning and one in warm, dry, sunny conditions in the afternoon have vaulted the Cape Motorsports with Wayne Taylor Racing contender to second place in the Cooper Tires USF2000 Championship Powered by Mazda with five races remaining.

The morning’s race, which was run primarily behind the pace car due to a series of on-track incidents, saw Alberico leading for most of the distance, although he did have a slice of good fortune in the late stages. Teammate and championship leader Scott Hargrove executed a magnificent outside-line pass on Alberico in Turn One at a restart on lap 13.

At the very next corner, Danilo Estrela, who had been running third for Belardi Auto Racing, also dived past Alberico on the outside line going into the Keyhole. Hargrove glanced in his mirrors an instant before turning in to the right-hand corner, only to see the No. 11 car slithering out of control directly toward him. Hargrove wisely drove straight on through the gravel trap to avoid the contact. The good news is that he was able to continue without any significant damage. The bad news is that he fell all the way to 17th before he could extricate himself from the gravel trap. Alberico, meanwhile, was long gone in the lead.

Other fine drives were posted by 16-year-old Frenchman Florian Latorre (JAY Motorsports), who climbed from 14th to fourth, and Michael Epps (Belardi Auto Racing), who used his extensive wet weather experience to rise all the way from 17th on the grid to a career-best fifth and claim the Tilton Hard Charger Award.

Weather conditions for this afternoon’s ninth round of the USF2000 series could hardly have been more dissimilar. It made little difference to Alberico, who once again started on the pole and took off into the lead. Garett Grist (Andretti Autosport), who started second, and Hargrove exchanged places a couple of times on the opening lap before Grist asserted himself in second position.

The 18-year-old also had been running second this morning and set the fastest lap of the race until a broken drive-train forced him out of contention. He once again claimed the bonus championship point for fastest lap this afternoon, but had to be content with a fifth-place finish after running wide onto the grass at the Carousel turn on lap 15 and relinquishing his runner-up position.

Hargrove gratefully accepted the gift to regain second place and maintain a 22-point championship lead over Alberico going into tomorrow’s third race of the weekend.

Peter Portante (Belardi Auto Racing) drove a fine race to climb from eighth to third this afternoon ahead of Enerson and a fast-closing but ultimately frustrated Grist.

Latorre once again made up for a poor qualifying position by rising from 15th to seventh to secure the Tilton Hard Charger Award. 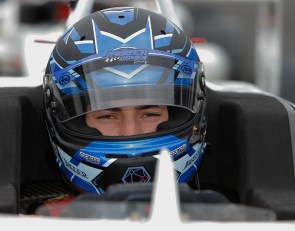 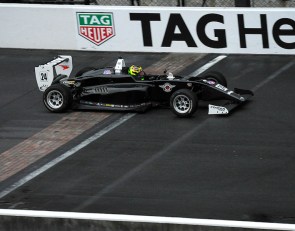