Danilo Estrela emerged from a dramatic seventh round of the Cooper Tires USF2000 Championship Powered by Mazda to claim a first series victory in this morning’s second leg of the Analytic Systems USF2000 Grand Prix of Toronto.

Estrela, 20, who hails originally from Goiania, Brazil, and lives now in Orlando, Fla., ran second for much of the caution-interrupted race which was held in hot, humid conditions. He slipped to third following one of the restarts but charged back to take the lead with a scintillating outside-line pass of erstwhile pacesetter Neil Alberico in Turn Three on lap 17.

Estrela (Belardi Auto Racing) took advantage of the jostling of positions in his wake to pull out an appreciable advantage, and even though series leader Scott Hargrove (Cape Motorsports with Wayne Taylor Racing) was able to break clear of the pack and close rapidly in the final couple of laps, Estrela had enough in hand to secure the victory.

“I tried to pass [Scott] Hargrove on the outside the lap before and it didn’t work out so I figured if I could break a little bit later and turn later, I could run on the tarmac and not on the concrete and I would have the run on the outside of the corner. Neil [Alberico] did what I expected him to do and went to the inside so I braked late into Turn One and overtook him. I couldn’t be more happy. The track is amazing; the event is amazing and the car was really good. We have been trying very hard and I have to thank Brian [Belardi] for helping me. The team won at Mid-Ohio, our next race, last year and I am very excited to go there and try for another win.”

Florian Latorre, 16, from Auriolles, France, slipped from third to sixth in the opening laps before charging back to snare his second podium finish in as many days for JAY Motorsports.

Peter Portante, in a second Belardi Auto Racing Van Diemen-Mazda, somehow battled his way to second place, behind Estrela, following the final restart. The youngster from Plainville, Conn., winner of last year’s Skip Barber Racing Scholarship, was bundled down to fourth at the finish, just ahead of a snarling pack which included Alberico (Cape Motorsports with Wayne Taylor Racing), who had been shuffled down the order at Turn Five at the final restart, Garett Grist (Andretti Autosport), Felipe Donato (ArmsUp Motorsports), Michael Epps (Belardi Auto Racing), Dalton Kellett (Pabst Racing Services), Brandon Newey (Afterburner Autosport/BHA with Curb/Agajanian) and Daniel Burkett (Belardi Auto Racing), all of whom were blanketed by a meager 2.543 seconds at the checkered flag.

Scott Rettich once again claimed top honors in the USF2000 National Class Presented by SCCA Enterprises at the wheel of his Alliance Autosport team’s Van Diemen-Mazda.

Contingency awards included the Tilton Hard Charger Award to Austin Cindric of Andretti Autosport for an impressive gain of 11 positions from 24th to 13th, the Staubli Award to Estrela, the PFC Award to winning teams Belardi Auto Racing and Alliance Autosport and the National Class Masters Award Presented by Elite/Comprent to Rettich.

The Cooper Tires USF2000 Championship Powered by Mazda will reconvene at the Mid-Ohio Sports Car Course in Lexington, Ohio, on the weekend of August 2-4 for a triple-header event once again in support of the IZOD IndyCar Series. 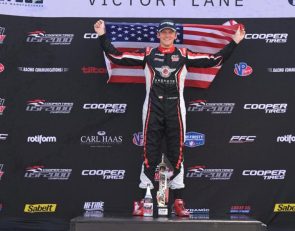 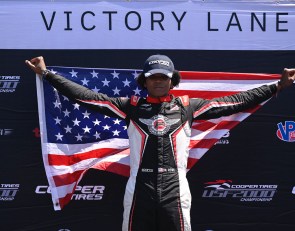 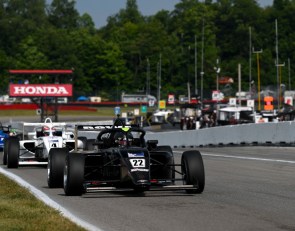