Reversing tires running them on the opposite side to the one they are designed for is not a new trick but has come and gone with different tire suppliers. 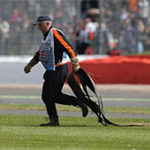 It is common practice for teams to reverse a worn set of tires and the outer shoulder of the tire is still the outer shoulder when reversed and there does not appear to be a performance advantage. Instead, it is about teams aiming to get more use from worn sets because tires on one side of the car will wear more the other.

Because of the asymmetric design of the steel belt in the pre-Nurburgring tires, there is the problem that a reversed tire has the joint between its two ends pointing in the opposite direction, making it easier for it to separate if there is a problem with the tire’s shoulder, as happened at Silverstone.

Tire pressure is a key tuning aid, with stability, traction and warm-up characteristics all affected. At Silverstone, teams ran lower pressures, perhaps below Pirelli’s recommended settings. This makes the tire move about more as it is supported less by internal air pressure and with the 2013 tires having stiffer shoulders and more pliable sidewalls, they will deform more and place greater stresses on the shoulder join.

This is the angle of the wheel and tire assembly relative to the vertical and, at a standstill, the front camber angle is usually around 3.5 degrees from vertical with the rear set at between zero and one degree.

As the top of the tire tilts inward toward the center of the car, this measurement is negative and the inner shoulder will bear more of the load. As the car moves around the track, the suspension will vary these camber angles by several degrees. Such an increase in camber increases the stresses on the tires inside the shoulder.

At Silverstone, the drivers were putting tires inside the curb to straightline certain corners, meaning the loads on the inner shoulder of the tire would be far higher than usual. Any cuts or imperfections in the tires could lead to the catastrophic failures seen during the race.

Currently, these setup tricks remain unregulated (although Pirelli has asked for this to change as soon as possible) so teams are free to run the tires outside Pirelli’s recommendations in pursuit of performance.