Barrett-Jackson Scottsdale to kick off its 2023 auction season

Barrett-Jackson Scottsdale to kick off its 2023 auction season

Barrett-Jackson’s 2023 auction season rolls underway in earnest January 21-29 with its Scottsdale Auction at WestWorld of Scottsdale, Ariz. Many thousands from across the globe will take part in what has become a world-renowned automotive lifestyle event, featuring a variety of activities and experiences beyond the block for auction-goers of all ages.

The 2023 Scottsdale Auction docket features many extraordinary early consignments, including the 1966 Shelby Group II Mustang that was built for legendary racer Ken Miles; a highly desirable 2005 Porsche Carrera GT, one of only 644 sold in the United States during its production run from 2004-06; and several Ford GTs, including a Frozen White 2020 Ford GT Carbon Series, a 2019 Ford GT Lightweight and a second-generation 2006 Ford GT that is one of two with factory stripe delete and one of only 75 finished in Speed Yellow.

See the full story at VintageMotorsport.com. 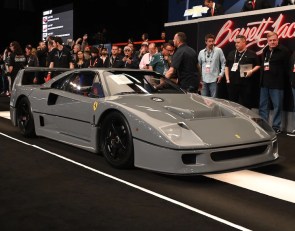