They are, at first glance, the same thing. The tires used on race cars and the tires on a typical street car are both round, affixed to wheels and inflated with air.

That’s where the similarities become more nuanced. A closer examination brings out the differences between the tires on your daily driver and the Michelins used on cars competing in the IMSA WeatherTech SportsCar Championship.

We asked Hans Emmel, IMSA WeatherTech Series manager for Michelin North America Motorsports, about the differences between racing and street tires. The answer came down to pretty much everything — with a few similarities, as well.

Here’s a basic tutorial on the main distinctions between street tires and racing tires:

Pressure and temperature: Street tires usually require somewhere between 32 and 45 pounds per square inch (PSI) of air to be considered fully inflated. Racing tires run at much lower pressure – usually around 26 or 27 PSI — when hot.

“Depending on where you’re at, the temperatures on street tires could be running at 80 or 90 degrees Fahrenheit if you touch the tread,” Emmel explained. “A racing tire operates at pressures as low as 26 or 27 PSI when the tires are hot – the difference being that the pressure growth you see in the racing tire from when it’s cold to hot is much different than your street tire.”

Camber: It’s the inclination of racing tires to help balance the loads required by high-speed cornering. Race cars require it, while street cars generally do not.

“In a racing tire, you’re running a lot more camber on the car — the geometry at which the top of the tire leans in compared to the bottom,” Emmel said. “On your street car, the tires are more or less straight up and down unless it’s a high-end sports car.

“The race car runs quite a bit more camber so when the vehicle goes into a corner, you can level out the distribution of loads and stress on the tire due to the high cornering forces.”

Tread: The tires on your daily driver have treaded surfaces, allowing them to perform properly in all weather conditions. Racing tires used in dry conditions have a slick surface.

“There are no tread grooves or siping on a racing tire,” Emmel explained. “Obviously the reason for that is the racing tire is running in only one condition — dry — and you want the maximum amount of contact between the tire and ground. In a road car, you’re dealing with a lot of different conditions, whether that be wet, dry or snow. You have to have those grooves and siping to break the surface tension of the water and funnel it through the tires so they don’t hydroplane.”

Similarities: Yes, there are proud differences between street and racing tires, but they do have much in common.

Both use natural and synthetic rubbers. Both have elastomers and carbon black. Both have steel, polyester, aramid and nylon or some combination of those materials.

That’s where each benefits the other. What’s learned from racing tires often ends up in street tires, and vice versa.

“What’s found at the racetrack can find its way back to the street tires,” Emmel said. “Generally, they’re not produced in the same place. That being said, some of our racing products are made in the same factory as street-going products.” 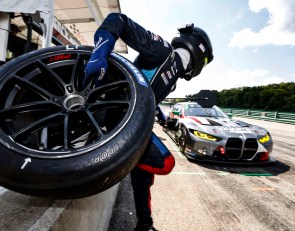