Persistence paid dividends for Hyundai’s Thierry Neuville in the FIA World Rally Championship finale as he grabbed the Rally Japan victory from a faltering Elfyn Evans on Toyota’s home asphalt.

The stage was set for a thrilling final day of the 2022 WRC season and, as the cars prepared to head out of the service park for the last time this year, tires were the main talking point. Meteorologists from both camps had their work cut out and there were contrasting opinions on whether rain would fall in the early afternoon.

With no service once the run of stages began, the six tires the drivers would start with — four on the car and two in the trunk — would have to see them through the whole leg. Neuville believed it would rain and took an even spread of hard compound, soft compound and wet weather Pirelli rubber. Evans, on the other hand, wasn’t convinced and opted for a 50:50 split of hard and soft compound tires to see his GR Yaris Rally1 through the day.

It appeared that Evans had made the correct choice when he moved to within six-tenths of a second of Neuville after blitzing the Belgian through the opening Asahi Kougen stage. But the excitement back at Toyota’s base as a home win looked on the cards again was short lived when disaster struck on the very next test.

Although he seemed to have guessed right on tactics, a minor error spoiled Evans’ chances of a Toyota home win. Toyota Gazoo Racing WRT

A miscommunication between Evans and co-driver Scott Martin saw the duo run wide on a right-hand bend, nudging a curb with the Toyota’s left-rear wheel. The resultant puncture took more than 1m30s to change, stopping the scrap for the lead dead in its tracks as the Yaris plummeted down the order.

While rain did arrive for the final two tests, it was no worry for Neuville. He cruised to the finish 1m11.3s clear of departing teammate Ott Tanak, who benefited from Evans’ heartbreak to secure an important 1-2 for Hyundai on the home roads of its archrivals Toyota.

“It feels great,” Neuville exclaimed. “It wasn’t an easy weekend or an easy year, but to end with a victory after showing good speed all weekend is a great way to end the season. Our weather guys did an incredible job this weekend, so thanks to them and thanks to everybody.”

Local hero Takamoto Katsuta also moved up the order at teammate Evans’ expense to secure his second podium of the season at an event based just a few miles from his Nagoya birthplace. The 29-year old trailed Tanak by a minute at close of play, with Yaris colleague Sebastien Ogier a mere 12.3s further back in fourth.

The charging Ogier leapfrogged Evans with a plucky run through the wet penultimate stage, despite having to slither his way through on slick tires. Ending only 2m23.6s down on victor Neuville, the eight-time WRC champ was left to rue what could have been as he lost almost three minutes with a puncture on Friday morning.

A frustrated Evans held on to fifth to complete a winless 2022 campaign, just 2.3s ahead of M-Sport Ford’s Gus Greensmith who rounded out the top six in his Puma Rally1.

Newly crowned WRC champ Kalle Rovanpera ended his campaign down in 12th in his Yaris. The 22-year-old Finn was pushed out of the reckoning by a puncture and a wheel-damaging brush with a wall on Saturday’s second leg, and the decision not to take any wet rubber for Sunday’s stages merely compounded his problems.

In WRC2, the second tier of international rallying, Emil Lindholm and Reeta Hamalainen claimed the drivers’ and co-drivers’ titles after finishing third in class.

The Toksport Skoda Fabia Evo crew looked on track to claim the class win along with the WRC2 title, only to be usurped in the penultimate stage by an incredible drive from Gregoire Munster. In streaming conditions, the Luxembourg driver threw caution to the wind with his Hyundai i20 N Rally2, completing the test 1m17s quicker than Lindholm to climb from third to first.

Still, Lindholm knew a top-five finish at this final round would be enough to seal the title and so drove accordingly in the closing miles. The cautious approach saw him slip behind Teemu Suninen’s i20 and finish third, but it didn’t matter — the job was done and Lindholm was on top of the WRC2 world.

“Honestly, it will take a while to sink in,” exclaimed the 26-year-old Finn. “We have had difficult times but I am so grateful for the people who have continued to support us. It finally seems to be paying off.”

And that’s that for the 2022 season. But the 2023 WRC season kicks off in a little over two months from now, heading to the French Alps for the asphalt and ice of the Monte Carlo Rally, Jan. 19-22. 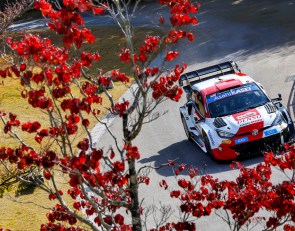