The Trans Am Series presented by Pirelli will host an all-time record number of entries this weekend in the 2022 season finale at Circuit of The Americas. The combination event with both National Championship and Western Championship participants will feature a total of 81 entries between the TA/XGT/SGT/GT race and TA2 race, making it the largest field since the series’ inception in 1966.

In addition to the record-breaking combined entry list for the longest-running professional road racing series in North America, the TA2 event on its own has 54 participants, the largest field ever entered in the class. The TA2 class has seen explosive growth, both this season and in recent years.

This weekend’s race also boasts growth in TA/XGT/SGT/GT competitors. In addition to fielding the most entries of the season (27), Sunday’s race at COTA will see the most diverse mix of car makes and models that we’ve seen in 2022, with 11 car manufacturers and 14 different models. The field will be packed with the familiar Mustangs, Camaros, Corvettes, Challengers, Vipers, Porsches and Audis, but will also include some more rare appearances, including a Toyota Supra, Hyundai Veloster N TCR, Maserati MC GT4, McLaren 570S GT4, BMW M3 and Mercedes AMG GT3.

“This weekend’s car count is a monumental achievement for the Trans Am Series,” said Trans Am President John Clagett. “Since 1966, Trans Am has been drawing some of the best competitors in all of motorsports, and to be breaking records in a series that has more than a half century of history is a true accomplishment. Grids of this size show just how much our competitors want to be here to hone their craft and race against the best in road racing.”

“Trans Am has experienced exponential growth over the last decade, especially in the TA2 class,” said Tony Parella, owner of Trans Am Race Company. “The fact that our 10 largest fields in series history have all been at events held in the last seven years means that we must be doing something right. The addition of the Western Championship in 2017, our technological advancements and cost-cutting measures have allowed more competitors to choose Trans Am as their home, or as a step in their career development. We are so proud of this series and our competitors, and can’t wait to see what 2023 brings.”

Trans Am’s first official on-track sessions for this weekend’s event begin tomorrow at 11:25 a.m. CT. The TA/XGT/SGT/GT race will be contested on Sunday, November 6 at 9:30am CT, followed by the TA2 finale at 11:45am CT. Both races can be watched live on the Trans Am YouTube page and Facebook page. 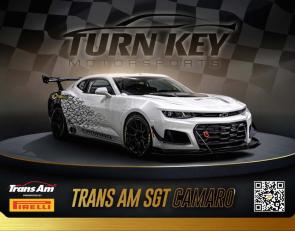