Raoul Hyman opened the Mission Foods Austin SpeedTour weekend at Circuit of The Americas with a win in Formula Regional Americas Championship Powered by Honda (FR Americas) to clinch the 2022 drivers’ championship. The race did not come without adversity for the driver of the No. 27 Bethesda Holdings Limited / Solomon Capital Enterprises / Oaklands / Kinross Ligier JS F3, as he lost the lead on the first lap and had to fight from behind for nearly the entire 30 minutes before finally taking the win.

“I’m so grateful to be able to be here; winning the race was our target,” said Hyman. “We didn’t have new tires in that race, so we didn’t give ourselves the best opportunity to win. We were focused on the rest of the weekend, as well. To come away with the win and clinch the championship is the culmination of all the work and prayers for the last three years. I wasn’t racing two-and-a-half years ago. To be here now and have something in place for next year is such a blessing. Dylan [Tavella] did an amazing job. He positioned the car really well and was fast in the places he needed to be. Dylan’s extremely clean and it was a pleasure to race against him.”

Dylan Tavella (No. 14 Crosslink Kiwi Motorsport Ligier JS F3) put up a solid fight, overtaking Hyman in Turn 12 on the opening lap and continuing to lead for the first 12 laps. It wasn’t until lap 13 when Hyman was finally able to catch Tavella in Turn 12 and pull side-by-side. After racing that way around the circuit for an entire lap, Hyman finally completed the pass as they came back through Turn 12 on their way to the white flag. Once again side-by-side exiting Turn 20, Tavella tried to put the power down to get traction out of the corner, but oversteered to spin just before the flag. With momentum on his side, Tavella rolled across the finish line, backwards, in the second position.

Nick Persing (No. 29 OPI Commercial Builders Ligier JS F3) was initially scored third, but a stewards decision for causing a collision resulted in a five-second penalty, which relegated him to sixth on the official results. Instead, Ryan Yardley (No. 78 Crosslink Kiwi Motorsport Ligier JS F3) officially finished third to secure his sixth podium of the year.

A full run-down of the official results from Race 1 are available here.

Jason Alder returns to victory lane at COTA in Race 2

Jason Alder returned to victory lane at Circuit of The Americas  for the second year in a row with Formula Regional Americas Championship Powered by Honda (FR Americas). The victory in Race 2 of the Mission Foods Austin SpeedTour marked his third win of the season.

“That was tricky, especially being on the older tires,” said Alder after climbing from the car. “The track’s getting warmer and it’s getting greasy. Keeping it on the racetrack was the name of the game, and I’m glad we were able to do exactly that — even with that restart in there. There were definitely challenges to overcome, but it was a good race.”

With the fastest lap in Race 1, Alder started from the pole position in his No. 77 Drive for Diabetes Awareness / HAKUN Ligier JS F3. His teammate, Raoul Hyman (No. 27 Bethesda Holdings Limited / Solomon Capital Enterprises / Oaklands / Kinross Ligier JS F3), started second, but quickly took over the lead. Alder settled in behind, but had an opportunity to regain the lead when a mechanical failure struck Hyman’s machine on lap five.

The race restarted with just over 10 minutes to go, leaving Alder with one last restart to endure as Dylan Tavella (No. 14 Crosslink Kiwi Motorsport Ligier JS F3) applied pressure. With Alder able to pull a gap, the battle soon became between Tavella and Nick Persing (No 29 OPI Commercial Builders Ligier JS F3). Running third, Persing was able to study Tavella’s braking zones and began plotting his attack. On the white flag lap, he went for it, overtaking the second position and sailing off toward the checkered flag.

As they crossed the line, it was Alder in first, followed by Persing in second and Tavella in third. Ryan Yardley (No. 78 Crosslink Kiwi Motorsport Ligier JS F3) and Oliver Westling (No. 2 Jensen Global Advisors Ligier JS F3) rounded out the top five.

With only four of 11 laps completed, Hyman was not classified in Race 2, marking only his second non-podium finish of the season.

A full run-down of the official results from Race 2 are available here.

Tomorrow at 11:55 a.m. CT, the lights will go out for the final time of 2022, as FR Americas competes in Race 3 at the Mission Foods Austin SpeedTour. Follow FR Americas on Facebook, Instagram and Twitter for updates, or watch Race Monitor for live timing and scoring. 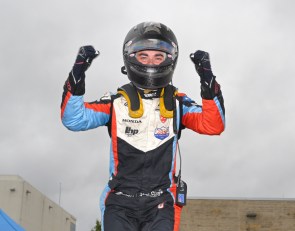 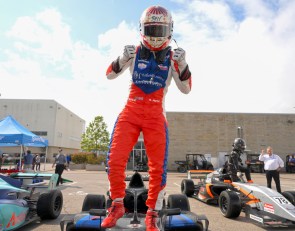