It was the final event day of the 2022 Blue Marble Radical Cup North America program as champions were crowned in all three divisions.

Earning race wins were Judd Miller, Reid Stewart, and Aurora Straus in race two while Jon Field, Palmer Miller, and Mike Anzaldi climbed to the top step of the podium in race three providing six different winners on the day and showing the competitiveness of the Radical Cup program in North America.

After a review of the points throughout the entire season, Riley earned the Overall Championship based on the number of wins and claimed the accompanying award and prize package to compete in a Radical Cup UK event in 2023.

Along with the championships, the awards listed below were handed out during the Blue Marble Radical Cup Awards banquet Sunday evening as more the eighty crew members, team owners, drivers, and family members were in attendance at the stunning Barrel Caves, a local Sonoma Winery

Rookie of the Year – Reid Stewart

After a delay for fog halted the green flag for thirty minutes, race two of the weekend got underway with a much cleaner opening lap than that day prior.

With a forty-minute race scheduled, Esses Racing driver Judd Miller jumped to the point and never looked back despite a hard charging from American Le Mans Series veteran Jon Field.

Miller led flag-to-flag to take the win by just over six-tenths of a second over Field who earned the fastest lap of the race and the hard-charger award as he drove from deep in the field to finish second in class and second overall. Jenks crossed the line in third to put a stranglehold on the Platinum Class Championship with Jim Booth and Scott Wagner rounding out the top five.

With five different teams represented in the top five on the results sheets including Esses Racing, One Motorsports, Group-A Racing, Wisko Racing, and Scott Wagner Racing, the top four were separated by less than two seconds when the checkered flag flew.

Aurora Straus scored her second win in as many races over the weekend, a penultimate lap pass on Palmer Miller kept her perfect string of trips to the top step of the podium intact heading into race three.

Miller was able to hang on for the second position and in doing so, secured the Pro 1500 championship honors while Will Lin was able to find his way back to the podium in third.

Joe Nuxoll ran third for much of the race before a mechanical issue pushed him down the running order, elevating Lin to third. Ron Fletcher crossed the stripe in fourth and like the Platinum class, put drivers from four different teams in the top five with Esses Racing doubling up on top-five finishes courtesy of Miller in second and Kent Myers in fifth.

Gregg Gorski, who secured the Pro 1500 class pole position, was aiming for a podium but a fuel issue sent him back to the pit lane and eventually, he was forced to retire.

Reid Stewart followed in the footsteps of Pro 1500 double weekend race winner Straus as he was able to fend off the advances of Austin Riley and Mike Anzaldi who were still battling for the championship. Stewart, who has been the class of the field all weekend long, earned the fastest lap of the race on route to his second trip to the top of the podium.

Riley crossed the line in second all but assuring him the title once he starts race three as Anzaldi joined Stewart and Riley on the podium in third. Brendan Wright completed twenty-one of the twenty-four circuits and was eventually classified in the fourth position.

Jon Field rose to the occasion in the Platinum class and garnered maximum points in the final wheel-to-wheel action of the Blue Marble Radical Cup North America season. Steve Jenks crossed the line second and confirmed his Platinum class championship as Judd Miller completed the final podium of 2022.

Jim Booth and Scott Wagner both added top-five finishes, both of their second top-five results of the day and another instance where five different teams were represented within the front five drivers.

With the championship already in his hands, Palmer Miller put an exclamation mark on the final event weekend with the Pro 1500 win and gained a ton of momentum heading into the Radical World Finals Presented by Hankook.

Gregg Gorski was finally able to shake off the bad luck that he had since the weekend’s racing began to stand on the podium in second, adding to his pole position performance earlier in the week and in race three, earned himself the Sunoco Hard Charger award.

With two wins already to her credit, Aurora Straus made it three podiums over the course of two days to finish her weekend in third ahead of Joe Nuxoll and Will Lin, who both had solid top-five weekends. Straus led early but fell behind on the pit stop exchange but managed to hang on for a podium result.

Despite not winning the championship, Mike Anzaldi finished his season on top scoring the round three win in the Pro 1340. Admittedly heated after the race one contact with eventual class champion Austin Riley, Anzaldi returned Sunday to finish the season third and first in the final two races and will look to the World Finals in Las Vegas to cap off his season.

Reid Stewart, who scored the race one and two victories in Sonoma, capped off his weekend with a triple podium performance crossing the line in second, just ahead of the No. 888 machine of Brendan Wright. With the championship attained by starting the race, Austin Riley went off in turn two and fell several laps behind the race leader. Back on track and soldiering on to be classified in the fourth position, Riley was named the Pro 1340 Champion.

With the 2022 Blue Marble Radical Cup North America season now complete, teams and competitors will shift their focus to the Radical World Finals Presented by Hankook at the Spring Mountain Motor Resort and Country Club from November 9 – 13th. 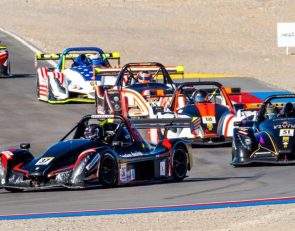 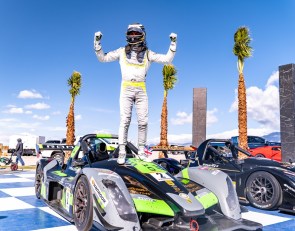 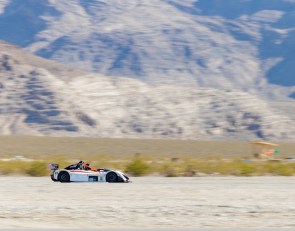